Severe storms and possible tornado leave 40,000 without power in San Antonio, topple a train off its tracks in Austin and shuts down Houston airport while flattening areas of Texas

A powerful storm ripped through Texas beginning late Sunday, moving through San Antonio and Austin before making its way to Houston on Monday morning

In San Antonio, a tornado warning was put in affect around 10pm for some areas of the city and multiple reports came in of one touching down in Alamo Heights

Over 40,000 are without power and at least 150 homes damaged in the wake of the storm, during which 0.43inches of rain fell in less than 30 minutes 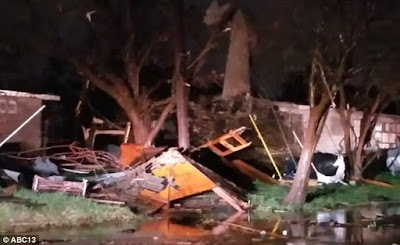 Wind gusts were recorded at 80mph overnight and managed to topple a train of its tracks in Austin, were there were few reports of major damage

The storm is now in Houston, where the city's two major airports announced ground stops on Monday, halting all incoming flights. So far no major injuries or deaths have been reported as a result of the storm as crews now get to work dealing with flooding and downed live wires 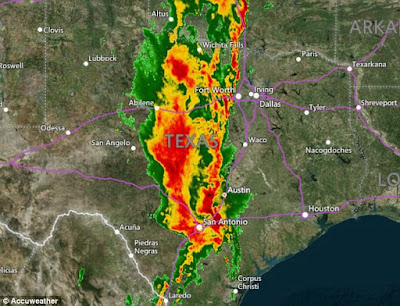 The bulk of the devastation seems to have resulted from the strong winds, which ripped the roofs off homes and trees out of the ground while even managing to flatten some structures. Power lines were also hit hard by the storm, resulting in the power outages which occurred across San Antonio.

A transmission tower was badly damaged overnight as well, with the winds dragging the top half of the structure to the ground as its power lines were ripped out and bending the tower in half.

Source: DailyMail (no link)
Posted by Neshama at 12:22 PM

R’ Elazar ben Avina said, “Misfortune comes to the world only on account of Israel…’ (Yevamos 63a, see Rashi“בשביל ישראל” and Rashi to Shemos 7:3 “ואני אקשה”). The Meiri says, “If misfortune rains upon the Jews themselves, they should assume responsibility for the tragedy...”(Artscroll Yevamos 63a, note 44)

All problems that we face us today is our fault. Yes, our fault!