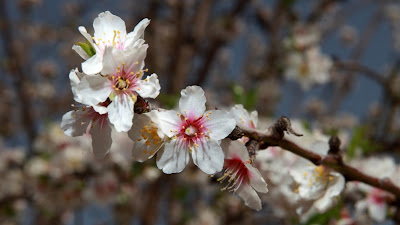 The almond fruit technically isn’t a nut but a drupe. The part we eat is the kernel, or seed, inside the elongated stone (shell). Other drupes are peaches, plums, cherries, walnuts and pecans.

University of Haifa researchers discovered that almond flower nectar contains a unique poison that does not harm bees, and which bees find irresistible. The scientists speculate that this toxic substance therefore gives the almond tree a reproductive advantage. 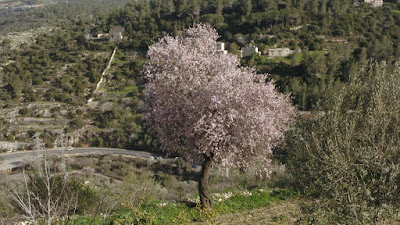 While the United States produces the most almonds in the world, Israeli almonds are larger, tastier, and contain 10% more calcium than American and most other varieties.

Last summer, Almond Board of California Director of Agricultural Affairs Bob Curtis and almond grower Don Cameron of Terranova Ranch joined a delegation from the California Department of Food and Agriculture in a fact-finding trip to see how the Israel’s advanced irrigation and planting strategies and technologies lead to better efficiency and sustainability. 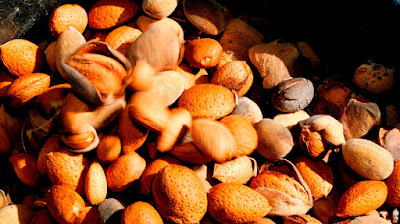 The biblical book of Genesis describes almonds as “among the best of fruits.” There are nine additional mentions of almonds or almond blossoms in the Hebrew Scriptures. In Christian iconography, almond branches symbolize the virgin birth.

Almond oil is used in many made-in-Israel cosmetics such as body butter and facial scrubs and creams. Almond oil is also used in traditional medicines, aromatherapy and pharmaceuticals.

The word “almond” derives from the Greek word “amygdala,” which is why the almond-shaped structures in the brain are called amygdalae.

The Hebrew word for almond, shaked (pronounced “shah-kaid”) is also a popular name for both boys and girls.


Source: By Abigail Klein Leichman, for Israel21c, on Janglo

A couple nice videos about planting trees in Israel