The Rouhani Effect
*The Nations of the World are Smiling their way to the Solution of the Jews.


"AIM OF IRAN - EXTERMINATION OF ISRAEL” As Rabbi Glazerson shows in this video of Torah Codes, “Iran sent up a ballistic missile written on it: 'Israel has to be wiped out’”.

Rouhani and the Iranian (Persian) Mullahs seek the destruction of Israel, and of course the Jews within Israel. The Rouhani Effect is thus, 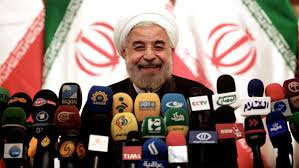 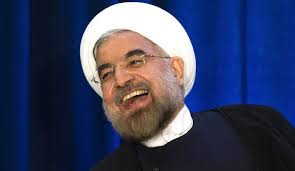 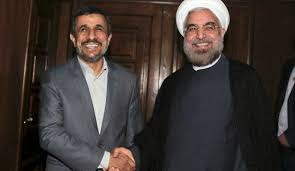 Why the Israelis "Can't see the forest for the trees." [An expression used of someone who is too involved in the details of a problem to look at the situation as a whole]

What this means is, the European leaders are adopting “The Rouhani Effect” in ‘soothing phrases’, and ‘smiles’, in their approach to forcing Israel to insert into the middle of their citizens, a Palestinian State, whose aim is also “the destruction of Israel and the Israelis”, from which they can shoot missiles and rockets and incendiary devices with the aim of “destruction of the Jewish State”.

‘Et tu, Theresa’ – welcome to the two faces of Mrs. May: "FOREIGN affairs have never been Theresa May’s bag. And, judged by her recent form and Britain’s deceit in oiling the wheels of UN Resolution 2334 – one of the worst examples of Machiavellian back-stabbing since Julius Caesar’s assassination “

Theresa May, 'all smiles’ while playing two-sides of the same coin: 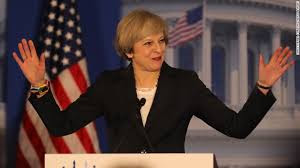 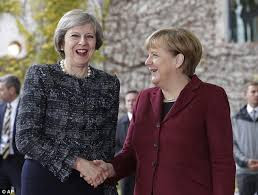 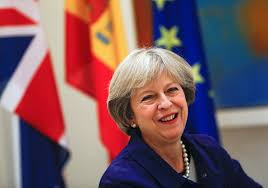 'The problem isn't Trump - it's Netanyahu’.
"The time for excuses is over," says Hevron activist Baruch Marzel, "Netanyahu has no reason not to annex, build up Judea and Samaria.” […] Marzel said Israeli policy in Judea, Samaria, and Jerusalem is and has always been decided by the Israeli Prime Minister, arguing that foreign pressure has only been a convenient excuse.

"Two hours after Trump was elected as the President of the United States I wrote an article that now all the excuses are irrelevant, and we'll all learn that the problem wasn't Obama, Carter, Bush or anyone else, the problem was always our Prime Minister,” Marzel told Arutz Sheva.

“Today it is Netanyahu, who is a weak man and a weak Prime Minister,” Marzel continued, arguing the makeup of the Israeli government is conducive to policies favoring expanded construction in and even annexation of Judea and Samaria."

NETANYAHU TO TELL TRUMP HE SUPPORTS A PALESTINIAN STATE: Prime Minister Benjamin Netanyahu will not retract his support for the creation of a Palestinian state when he meets with US President Donald Trump in Washington on Wednesday, Netanyahu made clear in Sunday’s security cabinet meeting.

Now enters the President of America,
Mr Donald Trump, 'all smiles and thumbs up': 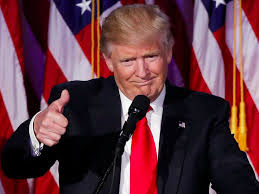 But, how does this translate into positive policies toward Israel and the Jewish Nation? 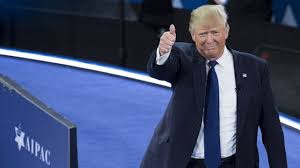 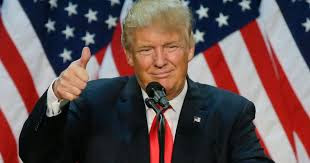 Trump and May at their White House Meeting, ‘all smiles and gestures of agreement and understanding’.

CNN: A Beacon of Prosperity "Reagan and Thatcher. Bush and Blair. Obama and Cameron. And now? Trump and May.” [read article to see how each stands on each of their vital interests, i.e., Brexit, Trade, NATO, Russia, Climate Change (has anything changed in the US and UK aims)] 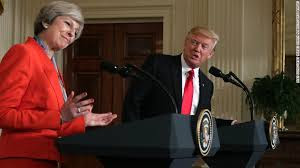 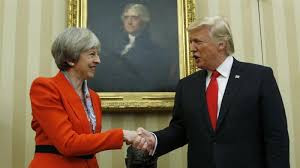 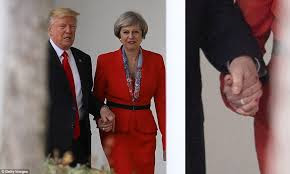 TRUMP ON THE MIDDLE EAST:
"Let me be sort of a neutral guy. I don't want to say whose fault it is; I don't think it helps." How do you remain neutral when the U.S. considers Israel to be America's closest ally in the Middle East?

TRUMP: President Obama has treated Israel horribly. I have very close ties to Israel. I've received the Tree of Life Award and many of the greatest awards given by Israel. As president, however, there's nothing that I would rather do to bring peace to Israel and its neighbors generally. And I think it serves no purpose to say that you have a good guy and a bad guy. Now, I may not be successful in doing it. It's probably the toughest negotiation anywhere in the world of any kind. But it doesn't help if I start saying, 'I am very pro-Israel.' It doesn't do any good to start demeaning the neighbors, because I would love to do something with regard to negotiating peace, finally, for Israel and for their neighbors." [For discussion on a myriad of topics, read the full link above] 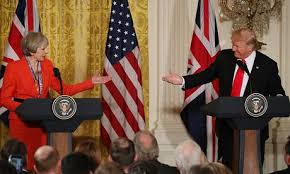 *But this is just the Stick in the Hand of Shamayim to bring His Children to Teshuva and the Final Geulah.

Hotovely calls for gradual sovereignty: Deputy Foreign Minister: The "settlers" are the ones under occupation, and it’s time to end the occupation. HOWEVER, Caroline Glick proposes that Israel should go full ‘sovereignty’ because we do not know what the after-effects will be and it is better to do as much as we can right at the start [this is what I heard her say, but I do not have a quote. Maybe it will come out later. And I agree with Caroline. Hotovely is being too careful in her choice of words.]

Minister Gilad Erdan"A Palestinian state is a bad solution which needs to become extinct. We should not dictate to Trump what we believe his position should be. Netanyahu will need to decide what to say based on how he feels during the meeting.

American immigrant denied citizenship over Temple Mount visit
American oleh's citizenship application was denied over arrest on Temple Mount. Police have since closed case, problem solved. [this is a decidedly new implementation of “What Israeli Law”?]

As I commented on Reb Dov’s blog: "[…]Obama is scheming to sabotage Trump’s presidency: ...He’s doing it through a network of leftist nonprofits led by ‘O'rganizing for Action. “
Posted by Neshama at 9:52 AM

they think to have everything figured out..but G_D is witnessing..and is in control..light comes from darkness..they will be made laughing stock!