POLITICAL ASSASSINATION
[One by One the Chief Organizer in action. Watch for more to come.] 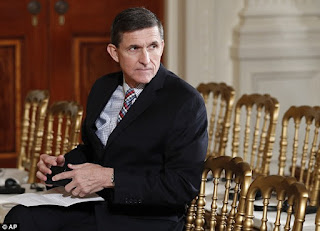 This all happened with Flynn back in December. Trump had not even been inaugurated yet. And it’s still mysterious to me what really happened. Even if, even if Flynn, as the incoming national security director, had called the Russian ambassador to talk, so what? That’s not hard to imagine. That’s not a big deal. It really isn’t a big deal.” RushLimbaugh

REMEMBER THIS: Savage noted that President Obama was caught on a hot mic telling outgoing Russian President Dmitry Medvedev that Vladimir Putin should give him more “space” because Obama would have more “flexibility” to work with Russia after his re-election in 2012. “Was there an outcry by the Lilliputians in the media then?” “I see the demonization of Putin, Russia and Flynn as part of a campaign by neocons, the intel community and Democrats who want constant antagonism with Russia,” he said.

FBI agents wrote a secret report, based on intercepts, summarizing Flynn’s discussions with Kislyak. Former acting attorney general Sally Yates concluded Flynn could be vulnerable to blackmail and suspected he could be in violation of the Logan Act, which bars U.S. citizens from interfering in diplomatic disputes with a foreign nation, the Washington Post reported. WND

Is there a conspiracy inside Washington to destroy Trump's inner circle?
Flynn as the 'appetizer' and the president as 'the entree.’

One Republican lawmaker is saying he sees a pattern in the leaks that brought down President Donald Trump's National Security Advisor Michael Flynn. Speaking to national security columnist Eli Lake of Bloomberg View,  Rep. Devin Nunes, the chairman of the House Permanent Select Committee on Intelligence, suggested that Flynn may be just be the beginning of Trump's inner circle fallen by enemies within the U.S. government.

Brian Fallon, who was the Clinton campaign's press secretary, has denounced the alleged contacts Donald Trump's campaign officials had with Russia prior to the election calling it a 'colossal scandal’.

Speaking to national security columnist Eli Lake of Bloomberg View, Rep. Devin Nunes, the chairman of the House Permanent Select Committee on Intelligence, suggested that Flynn may be just be the beginning of Trump's inner circle fallen by enemies within the U.S. government. 'First it's Flynn, next it will be Kellyanne Conway, then it will be Steve Bannon, then it will be Reince Priebus,' Nunes told the right-of-center Lake, who then referred to Flynn as the 'appetizer' and the president as 'the entree.' DailyMail [no link re pics]


The Shadow Government in Action
The NY Post reports on the speed in which Obama is racing forward with his plans:

“He’s doing it through a network of leftist nonprofits led by Organizing for Action. Normally you’d expect an organization set up to support a politician and his agenda to close up shop after that candidate leaves office, but not Obama’s OFA. Rather, it’s gearing up for battle, with a growing war chest and more than 250 offices across the country.” IsraelRising and NYPost.


"On Sunday, Channel 2 reported that Netanyahu told the high-level security cabinet”
"According to Yedioth, which has long been harshly critical of Netanyahu and did not cite its source for the report,”
"Netanyahu’s chief of staff Yoav Horowitz told reporters Tuesday that the government would “consider using polygraphs” in response to the leaks of the prime minister’s comments on Trump’s personality, saying that such leaks — even if they appeared relatively harmless — were detrimental to Israeli security interests.”

The Scheming Leftists will stop at nothing, and this is why there is a ’Political Stormcloud’ surrounding PM Netanyahu, on the one-hand.

"Bibi, this is the moment for which you became Prime Minister. Until now, you worked on braking. Now is the moment of truth - make a break for it and normalize the lives of half a million Jews in Judea and Samaria. […] They voted for you and for the Jewish Home, and these are the voters the government is built on. This is a basic demand, and if, G-d forbid, you fail this test, then as Moredehai said to Queen Esther, 'Salvation will come to the Jews from a different place.’” INNews

Now we understand why The Chief Rabbi of Israel gave Netanyahu a Blessing on his travel to the White House. "Chief Rabbi blesses Netanyahu: May God be with you, Sephardic Chief Rabbi Yitzhak Yosef speaks with Netanyahu ahead of Wednesday's meeting with US President Trump." ""May the Holy One, Blessed be He, be with your words. You are the representative of the entire Jewish nation, and there is no doubt God will aid you," Rabbi Yosef said. "I am moved by your blessing, and hope to do everything I can for the sake of Israel's security," responded Netanyahu. "I am reminded now of the conversations I had with your father before my trips, and I feel his blessing is accompanying me now, through you.”” INNews.

Considering all of the above, I believe Netanyahu understands what is so important about this meeting. And just as Caroline Glick said at the Sovereignty Kenes, (paraphrased) […] that Israel should go full ‘sovereignty’ because we do not know what the after-effects will be and it is better to do as much as we can right at the start.
Posted by Neshama at 12:28 PM