Muslims Run Over Farmer While Destroying His Wheatfield

Muslim rioters Destroy Wheat Field, run over Jewish Farmer near Shilo
"This is a rise in the Arab takeover of Jewish land, which is undoubtedly a direct result of police and military laxity against the Arab rioters on the ground. We've now issued urgent letters to the police demanding that the rioters be arrested and to seize the tractors with which the attack was carried out, among other things in order to pay back the damage caused to the farmer.”  Above Article from Arutzsheva “NewsBriefs”

Farmers Should Carry Guns for Protection Against Terrorists 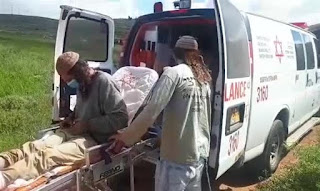 Arab rioters arrived this morning, Sunday, with tractors to a wheat field cultivated by Jewish farmers in the Shiloh bloc, and began to vandalize the field. A farmer who arrived at the site in an attempt to prevent the vandalism was hit and run over by one of the tractors. The injured farmer was evacuated by MDA forces to Shaare Zedek Hospital in Jerusalem. One Arab rioter was arrested at the scene.

Attorney Menashe Yado from the Honenu legal organization, which is assisting residents of the area, said,


Comment:
This is more-likely the result of the new ultimatums from the US concerning the “New Deal” to be imposed on Israel and Israelis; together with "Netanyahu’s new coronavirus restrictions."
Posted by Neshama at 8:46 AM