In light of the current political situation in America, this is recommended reading.

Best-selling author Brad Meltzer found the story behind his latest book, "The First Conspiracy: The Secret Plot to Kill George Washington," in a footnote. He said he took the surprising information to Pulitzer Prize-winning historian Joseph Ellis. (see footnote) 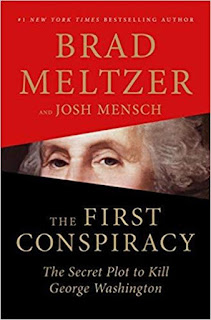 "I went to him and I said, 'Did this really happen?' And it really happened. When it happened, George Washington rounded up those responsible. He took one of the main conspirators and he hung him in front of 20,000 people – the largest public execution at that point in North American history," Meltzer said Tuesday on "CBS This Morning." "He brought the hammer down, was like, 'I'm George Washington. Don't mess with me. I'm going to be on the money one day.'"

So how did the story of the plot get lost in history?

"Hanging happened on June 28, 1776. Guess what was happening in the world? The Declaration of Independence. The British were literally there and this gets lost to it," Meltzer said.

The book details an effort to undermine the American Revolution just before the signing of the Declaration of Independence and with British troops about to invade New York City. The plot connects counterfeiters, leading New York politicians and even the future president's own bodyguards. At the time, Washington had private bodyguards, Meltzer said, who were the "best of the best" from his regiments.

"These were the men who turned on him. They were called the lifeguards because they guarded George Washington's life. And I don't care how strong you are — when your inner circle turns on you, it is devastating," Meltzer said.

Through the book, you come to know more about the birth of the counterintelligence movement in the U.S., Meltzer said. Washington launches a secret intelligence subcommittee to uncover espionage, with John Jay in charge. Jay went on to become the first chief justice of the United States.

"He puts into motion interrogations, kicking in doors. And to this day, we all think of the CIA, the precursor being the OSS [Office of Strategic Services], it's actually this moment," Meltzer said. The CIA headquarters in Langley, Virginia, even has a conference room named after Jay.

In addition, the book highlights Washington's character, as witnessed in the *Battle of Brooklyn in 1776.

"What he does is he commandeers all of the boats on the East River, but here's the key moment: he won't get in the boat until all of his men get in first. And his men see what he's doing, he's risking his life for them. Again, what you see is not just the plot against George Washington, you see the depth of his character," Meltzer said.

"We need that in our leaders today," he added. "George Washington brought this country together… by putting his arms around them and saying to his own regiments, 'Don't fight with each other, don't argue [with] each other. We need to be on the same team.' That's where we are today," he said.

*The Battle of Brooklyn History.com

Perhaps the doctors accomplished what the conspirators couldn't?