AntiSemitism and The New Members of Congress

It has been reported that Tlaib used the Quran of Thomas Jefferson. However:  Democratic Michigan Rep. Rashida Tlaib on Saturday denied recent reports that she was sworn in with former President Thomas Jefferson’s 18th-century Quran. Tlaib insisted that she instead used her own copy of the Islamic scriptures to make her ceremonial swear-in “more personal.” “I used my own *personal Quran* that my best friend of 25 years gifted me to use for the ceremonial swear(ing) in. *Note: I did not use Jefferson’s Quran as reported. I wanted it to be more personal (and my own).” [Thomas Jefferson’s Quran timesofisrael]

*Thomas Jefferson's Quran […] was actually read by Jefferson to fully understand and comprehend his and America's enemies in North Africa when he had to go to war against the Barbary Pirates who were ultimately defeated by the American Marines in Tripoli? People forget that the first war in which America was engaged after its War of Independence was a War against Fundamentalist Muslims who used the Quran as a basis for capturing American merchant ships and taking their crews as slaves, demanding high ransoms for their release. By the early 1800s Jefferson's America could no longer afford the spiraling high ransoms. So Jefferson went to war.


The New Faces of Congress
“Well sir, the floor of Congress is going to look like America . . . . And you’re gonna have to just deal.” 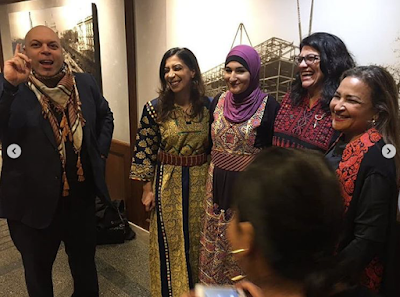 Accompanying Tlaib during the swearing-in ceremony was activist and fellow BDS backer Linda Sarsour. “It’s a national holiday,” Sarsour, also a Palestinian-American, said in a congratulatory Facebook video for Tlaib. “You’re witnessing history today.” Sarsour is best known as one of the leaders of the Women’s March, which has recently been roiled with accusations of anti-Semitism, with one activist recently telling The New York Times she was pushed out of the movement and that her Jewish identity was a cause for her ejection. JPost 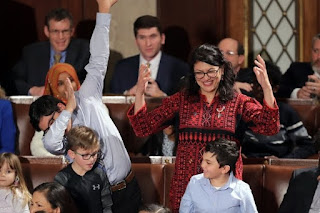 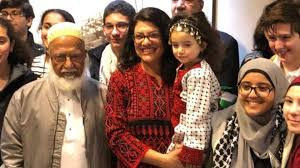 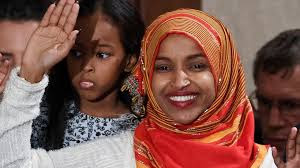 “No one puts a scarf on my head but me. It’s my choice—one protected by the First Amendment,” Ilhan Omar, an incoming Democratic representative from Minnesota, tweeted in response to the furious interest in the head covering she will be wearing on the House floor starting tomorrow. Omar is one of two female Muslim representatives taking her seat in Congress, and there is every indication that she will do so donning a hijab, the traditional Muslim head scarf. Though hats of all kinds have been forbidden in the House since 1837, this ruling is expected to be overturned as soon as the Democrats take control Thursday morning. The ban was originally enacted 181 years ago, because, at the time, hat-wearing on the floor was considered “harmless but apparently indecorous.”

When a Christian pastor averred that the House floor would look like an Islamic republic, Omar snapped back, “Well sir, the floor of Congress is going to look like America . . . . And you’re gonna have to just deal.” Vogue

Last week, the Alice Walker antisemitism controversy shifted from the New York Times to the History News Network (HNN). This time, legendary novelist Walker and a historian stooge proved downright Trumpian in doubling-down on offensive insults and displaying a stunning inability to see how others see them. Walker’s Jew-hatred offended most historians responding at www.hnn.us.

[…] Illustrating how anti-Zionism often battery-powers antisemitism, Walker finds “that part/of the puzzle that is missing,” the “root” of Israeli evil: naturally – “The Talmud” and “its poison.” She spits out the most notorious Jew-haters’ favorite Talmudic quotations wrenched out of context – which Icke also deployed.

[. . .] Her bigotry reveals how perverse the discussions are about Jews, Israel, and Zionism – it’s open season among too many progressives who won’t tolerate such intolerance against others but stereotype wildly about “the Jews.”

I Called out Alice Walker’s Jew-Hatred again, and she confirmed it – Again: by Gil Troy
Omissions can be read at JPost.com

______________________________________
Above Map timesofisrael
*Thomas Jefferson’s Quran timesofisrael : Tlaib’s clarification comes after many outlets reported that the freshman congresswoman used the same two-volume English translation of the Quran once owned by Jefferson and used for the swearing-in ceremony of former Democratic Minnesota Rep. Keith Ellison, who was the first Muslim elected to Congress. (RELATED: Keith Ellison Facing Violent Domestic Abuse Allegations Less Than A Week Before (Dec) Primaries)
Posted by Neshama at 12:18 PM