Following a pair of snowstorms into this weekend, the coldest air so far this winter season has its sights set on the eastern half of the nation.

The second in this pair of snowstorms will bring heavy snow and, in some cases, blizzard conditions, to the central Plains and Midwest from Friday into Saturday before impacting the mid-Atlantic and Northeast this weekend.

“Temperatures from the central Plains to the Great Lakes and Ohio Valley will plummet from the 20s, 30s and 40s Fahrenheit during the storm to the single digits, teens and 20s immediately behind it,” AccuWeather Senior Meteorologist Alex Sosnowski said.

Residents from the Upper Midwest to the central Plains and western Great Lakes will be the first to experience the arrival of Arctic air on Saturday, followed by the Ohio Valley and central Appalachians on Sunday and the Northeast on Sunday night.

“Because of the brutal cold following the storm, those expected to be in the area of heaviest snow may experience lengthy power outages that could lead to pipe bursts, especially on exterior walls or those that are improperly insulated,” Sosnowski warned.

Anybody living in these communities should have a backup generator on hand and be prepared to seek alternate ways of staying warm. 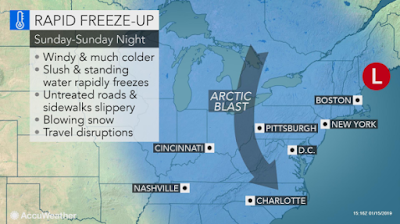 Although temperatures are expected to rebound closer to average during the middle part of next week, AccuWeather’s long-range team warns that even colder air will follow during the last few days of January and persist into February. 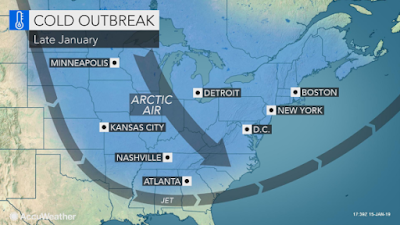