IF A YIDDISH SPEAKER TELLS you “Lign in drerd un bakn beygl,” consider yourself cursed. “May you lay in the earth and bake bagels” has a literal “go to hell” connotation: You’ll be trapped in the ground, unable to consume the delicious fruits of your labor. But the expression also harks back to a time when baking bagels was rather like being in hell, in underground bakeries with vats of boiling water and flaming, coal-fired ovens.

In New York, for decades, this was how the city’s bagels were made, by Jewish bakers stripped almost bare and sweating profusely. In the earliest and most unsanitary of these bakeries, cats swiped at inch-long cockroaches and napped by mounds of flour. Late into the 1950s, conditions were so unhygienic that bakers would not wear their filthy work clothes on the street. It was sweltering labor that required precision and skill—and would, in time, launch one of the fiercest unions the city ever saw.

The men of Bagel Bakers Local 338 were not to be trifled with. Founded in the 1930s, all 300-odd initial members were Yiddish speakers who descended from these hardy early bakers. Joining required a family connection—though this wasn’t sufficient on its own. Only after three to six months of apprenticeship, once a “bench man” had attained a minimum rolling speed of 832 bagels an hour, could members’ sons and nephews be grudgingly brought into the fold and given labor cards. 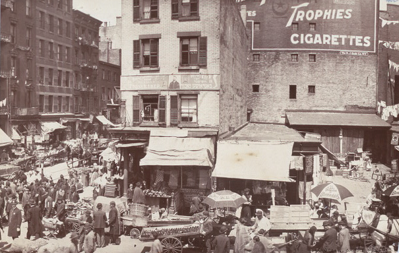 They were hardy, macho types, fuelled by homemade whiskey; sweet, strong coffee; and steaks seared black and brown by the heat of the bread oven. “You never spoke to the old timers unless they spoke to you. You didn’t approach them,” one member told Maria Balinska, author of The Bagel: The Surprising History of a Modest Bread. “And they didn’t look at you. Among themselves, they spoke Yiddish. Their first question to you—in English—usually was: ‘Who’re you related to?’”

It was not the first bagel bakers union in New York. As hundreds of thousands of Jews swept into New York ahead of the First World War, dozens of Jewish bakeries opened on the Lower East Side, mostly staffed by young Jewish men providing their friends and families with challah, rye bread, and bagels. An 1894 New York Press article describes the wet, rotting floorboards and an infestation “of a great variety of insect life,” with roaches “springing at a lively rate in the direction of the half moulded dough.” Laws to protect them were passed, but inspectors failed to do their job. Conditions were hard and dangerous, and bakers attempted to advocate for themselves by creating bakers’ unions. These quickly failed.

But Local 338 was different. Bagels were acquiring a special cachet among Jewish Americans, and bakers grew wise to the value of their special skills. Within eight years of formation, the union had contracts with 36 of the largest bakeries in the city and New Jersey. They had a ferocious reputation—non-union bagel makers were few and far between, and the holdouts experienced threats and day-and-night picketing until they toed the line.

From the outside, bagels seem an uncomplicated foodstuff. They are, after all, just hard-ish rolls with a hole in the middle. But that glossy exterior belies a complex process of kneading and shaping, “retarding” and proving [proofing], boiling and baking. Making a traditional bagel by hand might take 24 hours from start to finish.

After an initial shaping, the dough is “retarded” for hours at a time in a cool room. This slows down yeast fermentation. Rather than ballooning like a loaf, the dough rings fizz with lactic acid bacteria, giving them a slightly sour flavor and a distinctively crusty crust. Balinska offers a simple explanation: “It is thought to have been introduced simply because bakers were either unwilling or unable to work through the night.” The bagels are dipped in boiling water for barely a minute, cooled and dried, and then placed in a very hot oven. The margin for error is small. And so, as more and more Americans came to see bagels as an intrinsic part of Sunday breakfast, bagel bakers found themselves becoming irreplaceable, with appropriately rigid negotiating positions.

A March 1950 article from the Bakers and Confectioners’ Journal describes how teams of two bench men worked together to cut and twist the dough. “Walking into a bagel bakery gives you the feeling that you are entering another century,” the author wrote of the machine-free workspaces. “The air is thick with the flavor of the Old World, because modernism has no place in an establishment which produces this ancient Jewish bread product.” America’s bagels, the writer added, were a credit to their makers’ European ancestors.

Without machinery undercutting them, bagel bakers found themselves able to command impressively high salaries. Speaking to the New York Times in 1960, Local 338’s Benny Greengrass estimated base pay at $144 for a 37-hour week for bench men and $150 for oven men. In today’s money, this would be an annual salary of around $65,000, and far more than even policemen, engineers, or teachers were paid at this time. But they often worked overtime, and so could take home up to $250, or over $2,000, in a busy week. Benefits were many: dental, pensions, eyeglass, health, three weeks’ annual leave, 11 days of public and Jewish holidays. They were well-paid, and they would never go hungry: Each baker could take home 24 free bagels every day that he worked.

Bagel bakers renegotiated their contracts every year. And if they didn’t get what they wanted, they went on strike, plunging the city into what the Times called “bagel famine.” In December 1951, 32 out of 34 bagel bakeries closed, leaving shelves bare and sending lox sales shooting down by as much as 50%. Normally, the city’s bagel fiends ate 1,200,000 in a weekend—now, there were nearly none. Shopkeepers substituted bagels with whatever they could, variously throwing seeded rolls and Bialys into the void, but nothing else would do. (The strike was eventually resolved with mediation from the State Board of Mediation’s Murray Nathan, who had reportedly “helped settle the lox strike of 1947.”)

As technology improved, machines were developed that could make bagels faster, and more cheaply, than traditional artisanal labor. 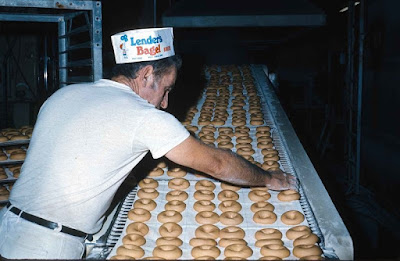 Six years later, in 1957, 350 members of Local 338 went on strike again. At first, bagel truck drivers did not strike with them—but the ire of the bagel bakers was considerable. “The drivers complained that they have been subjected to threats by strikers. Some drivers reported having their ignition keys stolen, their tires slashed, and their trucks hijacked.” Without drivers to deliver their stock, the owners of Pechter Baking Company, a bakery on Pacific Street, Brooklyn, were forced to give away nearly $20,000 worth of stock ($165,000 today). At first, they handed them out to passersby, but word spread, and a mob formed on the street, forcing them to close their doors and give the buns away to charity.

But the greatest bagel strike of all took place in February 1962. The bagel was growing in popularity, and bagel makers’ status had never seemed so secure. In the 1950s, the Times often assumed that readers were unfamiliar with bagels; the paper offered pronunciation guides (“baygle”) and described it as “a form of Jewish baked goods sometimes described as a doughnut with rigor mortis.” With the dawn of the 1960s, however, came the bagel’s widespread popularity. Now, New York City, the paper decreed, was “the bagel center of the free world, and will doubtless be kept that way by the hundreds of thousands of residents who find that a bagel makes breakfast almost worth getting up for.”

Each day, bagel bakers were manufacturing 250,000 bagels. According to the Times in 1960, the union had stamped out any attempt to automate the process—a “mad attempt by some radical” to can them, and a “pretzel machine manufacturer who offered to make bagels without the human touch.” The traditional dough was simply too tough for a machine to wrangle, leaving the bakers’ bargaining position undisturbed. With near-unlimited control over the bagel market, they struck for 29 days in 1962, resisting state attempts at mediation and reducing the city’s bagel supply by 85 percent. Eventually, employers acquiesced to all their workers’ demands.

But the victory was short-lived. The bakers had resisted technology for a long time, but little by little, “modernism” crept in. First, revolving ovens increased production rates and moved bakeries out from their traditional cellars and into the light. Customers were lured in by blinking neon signs that read, for the first time, “HOT BAGELS.” “It was not just that the union was losing control,” writes Balinksa. “It was also the fact that, for the first time, bagels were being sold directly to the customers.”

The real death knell, however, came from California. In the late 1950s, Daniel Thompson, a California math teacher turned inventor, created the “bagel machine” and quickly homogenized what had been an artisanal product. Thompson’s bagels lacked the lactic crustiness of the original, but they could be produced almost four times as cheaply, and by workers with far less bargaining power. Lender’s, a bakery in New Haven, Connecticut, led the charge in mass-producing bagels, and then selling them bagged and frozen to supermarkets. The foundations of Local 338 were swept out from beneath it.

At first, the union held out. They appealed to customers not to buy these pretenders, by distributing leaflets explaining their provenance that read “PLEASE DON’T BUY.” They had some success—customers were surprisingly loyal—but conditions got harder and harder as more commercially made bagels found their way into stores. The bagel makers vowed to picket the machines “round the clock” if they made it into New York, but their machismo was no match for automation.


Another strike attempt in 1967 made barely a dent on the market. For the first time, preservatives in the dough meant that New York’s bagels could come from out of town. The bagel makers had been replaced by machines, and the glory days were over. Some opened their own stores outside New York and introduced bagels across the country. Others moved on to other industries. By 1971, the union was definitively over.

In Jewish cookbooks, the bagel’s ring shape is often described as a symbol for the circle of life. In the space of less than a century, New York’s bagel bakers had gone from making a niche product and being exploited for it, to being one of the city’s strongest unions. Now, they were back where they started—while the city chowed down on machine-made bagels that bore little resemblance to the baked good at the center of these men’s lives.


Gastro Obscura covers the world’s most wondrous food and drink.
Posted by Neshama at 8:49 AM