DO YOU WONDER WHY THERE ARE TRAGEDIES?

more Jewish families’ lives torn asunder by the State of Israel. the symbolism is astonishing. The Path of our Fathers (Netiv Ha’avot) is being uprooted and destroyed!

Preparations for Demolitions in Netiv Ha'avot

Security forces are preparing the ground this morning, Tuesday, to enable the demolition of buildings in the Netiv Ha'avot neighborhood in Gush Etzion, following a Supreme Court decision. 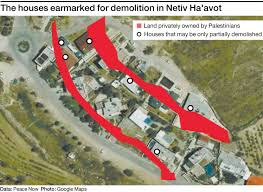 The Staff for the Struggle of Netiv Ha'avot announced that

"Less than 24 hours after Bibi and Bennett promised to do everything for the children of Netiv Ha'avot, they sent IDF forces to begin preparing for the destruction!”

“The army is currently paving roads and bypasses ahead of the evacuation, so that the forces can get it over with quickly. "

More than 60 children from the neighborhood came to the Knesset yesterday to speak to Prime Minister Benjamin Netanyahu, Knesset Speaker Yuli Edelstein, ministers and MKs, in an attempt to stop the demolition of their homes. 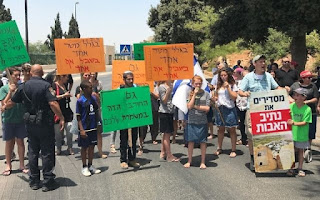 
"We will do everything we can, it's not easy, it's a very big struggle and it's not simple. Sometimes we have succeeded and sometimes not. You will have a home; the question is whether it will be the same one.”

The Supreme Court in December 2016 ordered the destruction of Elazar's Netiv Ha'avot neighborhood, after an unclaimed narrow strip of land not classified as government land was found to run through it.

In November, Israel Police destroyed a carpentry shop in Netiv Ha'avot which contained a small part of that land. Another sixteen buildings are slated for demolition in March for the same reason. The Court would not accept payment although except for that strip, the land is not privately owned.

In September, the State informed the Supreme Court that it supported the petition of the residents of six houses slated for demolition to have only the small sections of their homes which were built on privately owned land demolished. However, in October, the Supreme Court rejected the residents' request and ordered the homes destroyed completely.

Unbeliveable!!! Is it that i am in a nightmare....

It has to be ... a nightmare... Nothing makes sense.. perhaps i am in a coma.. perhaps i will wake up, and thank Gd it was just a nightmare dream..
annony

Unbelievable is right! Why have a PM and Knesset when the unsupreme court rules over everything? What a chilul H'!

Hold onto your kippa/sheitel/snood and read the UPDATE: Destruction of Biblical area