Michael Savage coined the phrase, “Liberalism is a Mental Disorder.”

“Someone who stands before a faucet many times a day scrubbing up for fear of germs and general contamination suffers from mysophobia. The condition which can lead to extreme anxiety, disrupts normal contact with others and is described as 'hard to live with.’ The Government of Poland has officialy put a law on the books, duly signed by Polish President Andrezej Duda, that smacks of political mysophobia. It attempts to scrub the Nazi stain off the country . . .” “Are we witnessing an ominous turning back of the clock to the 1930’s when truth, justice and precious freedoms were being snatched away?” [The Jerusalem Post, by Elwood McQuaid, 2/18]

Such a “disorder” is in the form of 'not facing the guilt within’. Repression of guilt in the mind of the perpetrator turns him into the ‘victim’ and thus accuses his victim of being the ‘guilty' one. [Wikipedia]

This is exactly what has happened.

Which brings to mind, “A Rose by any other name is a Rose.” Maybe not punishable, but what this instills in the twisted minds of some Poles can lead to rabid antisemitism.

The sheer equation is diabolical and psychopathic.

In fact, in today’s Jerusalem Post, Polish Chief Rabbi said: "Several young Jews are questioning their future in Poland on the heels of the “death camps law,” Polish Chief Rabbi Michael Schudrich told The Jerusalem Post on Sunday." Aftermath of the ‘death camps law’ leaves Polish Jews uneasy. . . "There have been various reports of an uptick of antisemitic discourse in recent weeks, as well at least a couple of antisemitic incidents in Poland” JPost

Twisted thinking that borders on mental [psychopathic] confusion: On Sunday, the Polish government claimed that the comment regarding "Jewish perpetrators" in the Holocaust was "a sincere call for open discussion of crimes committed against Jews during the Holocaust, regardless of the nationality of those involved in each crime."

Mental gymnastics is what the Polish Government is exhibiting, by accusing the Jewish victims of WWII Nazi Psychopath in his obsessive drive to annihilate the Jewish People and their Torah IN POLAND [in addition to accusing them of being *accomplices, equating them alongside Poles and Ukrainian accomplices]. It is not enough to criminalize the 'stating of truth of Polish participation in beastly murder of Jews and theft of Jewish property', they want to blame the Jews for the Shoah!

Wikipedia: "Guilt is a cognitive or an emotional experience that occurs when a person believes or realizes—accurately or not—that he or she has compromised his or her own standards of conduct or has violated a universal moral standard and bears significant responsibility for that violation.[1] Guilt is closely related to the concept of remorse.” "Guilt is an important factor in perpetuating obsessive–compulsive disorder symptoms [herein is the comparison with ‘mysophobia’]. "Projection is another defensive tool with wide applications. It may take the form of blaming the victim:” "Lack of guilt in psychopaths: Individuals high in psychopathy lack any true sense of guilt or remorse for harm they may have caused others. Instead, they rationalize their behavior, blame someone else, or deny it outright. There is "Collective guilt (or group guilt) [which] is the unpleasant and often emotional reaction that results among a group of individuals when it is perceived that the group illegitimately harmed members of another group. It is often the result of “sharing a social identity with others whose actions represent a threat to the positivity of that identity.” For an individual to experience collective guilt, he must identify himself as a part of the in-group. “This produces a perceptual shift from thinking of oneself in terms of ‘I’ and ‘me’ to ‘us’ or ‘we’.”

The ‘Stick' of Hashem is Poking the Jews of Poland

“This is my home. I have never lived anywhere else and wanted this to keep being my home,” said Jonas-Kowalik, a Jewish studies major at Warsaw University. “But this makes me very anxious. I don’t know what to expect.” 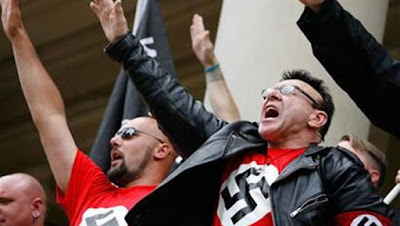 [Correct, as Jews, descendants of the Jews of Sinai, the Children of Hashem, you belong in our Homeland, in Eretz Yisrael, Israel.]

Report: Poland's official anti-Semitism
Churchill on Poland: It is a mystery and tragedy of European history, that a people capable of every heroic virtue... as individuals, should repeatedly show such inveterate faults in almost every aspect of... governmental life. Churchill on Poland, by Dr. Inna Rogatchi in her Report: Poland's official anti-Semitism",  This includes "a list, including only the official measures undertaken by Polish officials from January 2018 onward”   [A very important list]  The official racist and anti-Semitic policy of the current Polish government calls for full-weight all-spectrum sanctions against Poland in the diplomatic, humanitarian, educational, cultural, trade and military spheres.


1. Cradling the child in her arms, she soothed his cries. Then, she addressed the heavens: "Master of the Universe! Eight days ago you gave me a child. I know that neither I nor he will long survive in this accursed place. But now, when you take him back, you will receive him as a complete Jew.” Accomplice in the Circumcision

2. A kapo or prisoner functionary (German: Funktionshäftling, see § Etymology) was a prisoner in a Nazi concentration camp who was assigned by the SS guards to supervise forced labor or carry out administrative tasks. Also called "prisoner self-administration", the prisoner functionary system minimized costs by allowing camps to function with fewer SS personnel. The system was designed to turn victim against victim. . . Wikipedia

3. The German concentration camps depended on the cooperation of trustee inmates who supervised the prisoners. Known as Kapos, these trustees carried out the will of the Nazi camp commandants and guards, and were often as brutal as their SS counterparts. Some of these Kapos were Jewish, and even they inflicted harsh treatment on their fellow prisoners. For many, failure to perform their duties would have resulted in severe punishment and even death, but many historians view their actions as a form of complicity. After the war, the prosecution of Kapos as war criminals, particularly those who were Jewish, created an ethical dilemma which continues to this day. JewishVirtualLibrary.
Posted by Neshama at 10:55 AM

Those who were considered to be Jews but were Kapos and brutal against the Jewish prisoners were definitely from the Erev Rav or were not 'totally Jewish', as our Sages tell us that anyone who is 'brutal' towards another human being, especially a Jew against a Jew, is not a descendant of Avraham, Yitzchack and Yaakov. Unfortunately, the bolsheviks (we know of some of the the history of selling out to the nazis, yimach shmom v'zichrom) helped somewhat in the horrific shoah.
As we also know, the Poles were literal anti-semites, as many who knew first hand of their anti-semitism, say it's in their mothers' milk. In the end, H' will deal with all our enemies.