בס"ד
"We'll Take care of You”
Meir Ettinger tells the story of Moshe Shachor, who was arrested until the end of proceedings against him after police threats and three years of consecutive administrative orders

Moshe Shachar is detained for questioning in the Shai Unit, the official cause: suspicion of violating one of the administrative restrictions imposed on him. Moshe already has a 3-year seniority in administrative orders. Friends he had been forbidden to talk to for more than two and a half years, and long periods when he was not allowed to leave the house in the early evening.

This time it appears to be a routine investigation, but at the end of the investigation Harel Goldstein, a notorious interrogator who is responsible for the attacks on many Jews, enters and presents himself in his new role as an intelligence officer in the "Nationalist Crime" division of the בימ"ר ש"י.

He begins with what appears to be a routine warning and threats message, but suddenly he reaches out to Moshe and tells him if you shake my hand now and agree to cooperate - the administrative orders will be over, but if not - we will neutralize you …

Moshe did not shake his hand, and he was released a few hours later. 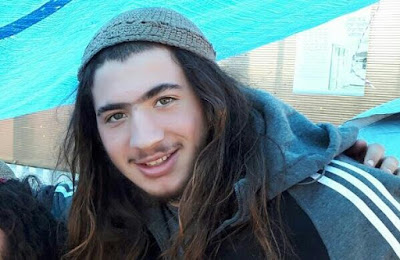 Moshe Shachor was arrested at the entrance to Beit Orot on the Mount of Olives. A police detective says that a few hours earlier he entered the beit midrash and saw him studying in Havruta (!) with Binyamin - a good friend who is on his contact list. Studying Torah ... The judge managed to send Moshe Ben Rivka to detention until the end of proceedings, and he is now in Ayalon Prison.

It's hard to believe that this story will bother anyone, no one cares about the bullying that is being waged against the hilltop boys. Even shocking stories from these, were received in silence, if not with gloating among the settlers, comfortable with them as long as it does not reach them. The members of the Knesset of the Jewish Home enjoy moving from the side of the persecuted to the side of the pursuers, and we have no one to rely on but our Father in heaven.