COVID ON THE RISE? NUMBERS SCARE, So Here Are Some

The Centers for Disease Control and Prevention (CDC) today released new data showing a total of 1,307,928 reports of adverse events following COVID-19 vaccines were submitted between Dec. 14, 2020, and June 17, 2022, to the Vaccine Adverse Event Reporting System (VAERS). That’s an increase of 6,572 adverse events over the previous week.

VAERS is the primary government-funded system for reporting adverse vaccine reactions in the U.S.

The data included a total of 29,031 reports of deaths — an increase of 172 over the previous week — and 240,022 serious injuries, including deaths, during the same time period — up 1,610 compared with the previous week.

Foreign reports are reports foreign subsidiaries send to U.S. vaccine manufacturers. Under U.S. Food and Drug Administration (FDA) regulations, if a manufacturer is notified of a foreign case report that describes an event that is both serious and does not appear on the product’s labeling, the manufacturer is required to submit the report to VAERS. 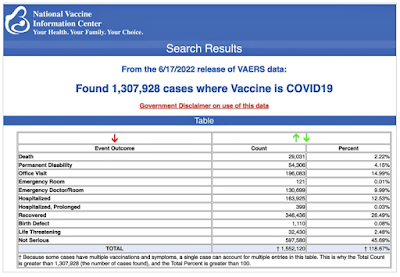 The study participants received two doses of Pfizer’s COVID-19 vaccine, were negative for SARS-CoV-2 and did not have COVID-19 symptoms.

The changes in sperm concentration, semen volume, sperm motility and total motility count after the second dose were assessed at various study phases.

The authors concluded the negative effect of the Pfizer vaccine on sperm quality was temporary. Yet, the actual data calculating the average of values showed sperm counts had not returned to normal after five months, the end of the monitoring period.

How does one really believe the figures given anywhere, when we re in the time where Chazal tell us 'truth will be gone'. We have seen much proof of that.
They can call it that virus or it can be something else and attributed (as was done at the beginning). There is and has been treatment which these 'angels' ha? do not allow.

If anything the numbers are much highter!!

So sorry I don’t like L Cohen, his words or anything about him.