The State of Israel or a Jewish State?

Shame, shame, on the State of Israel that wishes to be thought of as a Jewish State. One would think, after the Shoah, that those who survived would be cared for until they leave this world;

One would think, after the Shoah, that to be Jewish, observant of the Torah, even Haredi, that the government would be proud of its citizens being demonstrably Jewish. Instead, they dish out delicatessen–style Judaism, albeit with plenty of hummus.

In September, a Chabad rabbi was slapped with a NIS 736 ($209) fine from Herziliya city municipal inspectors for offering passersby the opportunity to put on tefillin, causing national furor. [the mayor has since apologized profusely; however, that this even occurred at all is disturbing.]

Agudas Chasidei Chabad, the umbrella organization for Chabad emissaries had said that "it's hard to believe that out of all the places around the globe where Chabad emissaries help Jews put on tefillin and connect to their parents' tradition, only in Israel will a person be fined or brought to court for it. Not in New York, not in Moscow's Red Square, not in London or at the foot of the Eiffel Tower. Only in Herzliya, a city in Israel.” ArutzSheva

The female soldier, who had to stop her car when she reached the demonstration, can be seen confronting demonstrators, demanding they make way. Some of the protesters responded by spitting at the soldier [kicking her] and calling her “shiksa”, [plus another] derogatory Yiddish slang word referring to non-Jewish women.

In a Similar Incident:

According to Channel 2, a police officer who was filmed drawing his sidearm and threatening to shoot protesters during Monday night’s demonstration will NOT BE INDICTED.

[Is this discrimination against female soldiers by the Police Dept.? Should not this be held under IDF review?]

What Does This Remind One Of?

TATOOING NUMBERS ON JEWS (HAREDIM) is against Halacha and reminiscent of the numbering of JEWS in World War II– Haredi anti-draft demonstrators arrested during protests across the country last week have refused to provide their names or ID numbers to authorities, leading police to mark those arrested with numbers on their arms and hands

“The Committee for the Salvation of the Torah World which is representing the arrested members of Peleg said that marking the arrested with number is ‘a Nazi tactic. It is as if we underwent a holocaust, 13 hours on a bus.’” YWN Numbers on Arms 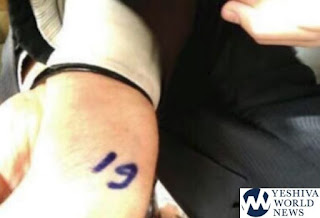 After police mark haredi demonstrators with numbers, spokeswoman explains decision: 'They all look the same, we had no choice.’ ArutzSheva

The decision to label the 27 detainees on their arms and hands drew criticism, those police were quick to defend the move, saying officers were left with few options given the detainees’ refusal to identify themselves.

On Monday, police spokeswoman Merav Lapidot appeared on Channel 2 to justify the labels, but drew additional criticism when she argued that such alternative identification procedures were necessary when dealing with haredi detainees, claiming that haredi Jews “all look the same”.

When Rabbis condemn and label the protestors with unsavory comments, it gives the secular public energy to denounce and criticize ALL HAREDIM, which includes anyone that is Orthodox (whether they agree or not with the protestors).

Hagaon HaRav Chaim Kanievsky On The Peleg: “Like A Sheep Without A Shepherd.” [Their shepherd is Rav Auerbach Shlit”a. One should not interpret this letter with their own words and understanding]. AND "Senior haredi rabbi compares radical haredi anti-draft group to ISIS TERRORISTS: 'They could teach Nazi propagandists a thing or two.’" 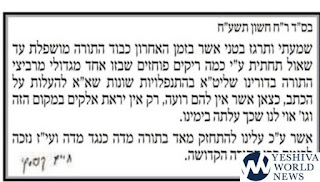 A Day of Rage: Analysis YWN. These are Talmidim of Rav Auerbach Shlit”a and we have not heard from the Rav, most likely because he is in the hospital.


18 Cheshvan Yahrzeit of Rabbi Meir Kahane – His words are chilling.
Posted by Neshama at 9:04 AM

Proof of the holy words of our holy Sages, such as the Gaon of Vilna, who said when the Jews will be back in EY at the end of times, it will be ruled by the Erev Rav. He called them the Erev Rav Amaleikim! Well, here we see it with our own eyes!

The Zionist state is reminiscent of the Bolsheviks. It is no wonder that most pioneering Zionist Jews were socialists. This influence continues to this day against the religious. Remembering that in Russia great part of the komintern were Jews, but they did not soften for the religion in no moment.

I'm not on any side - it's confusing. I agree that it's sickening to see numbers on Jews, but what should the police do if the people arrested refuse to give their names? When you're not used to being with a certain group )African Americans, Asians, etc., especially when they're dressed alike, it is hard to initially deferentiate. the same could be said for Africans beging exposed to people from the Netherlands. I don't think saying 'they all look the same,' is racist. The police were just speaking frankly.

I also cannot say that the protesters are wrong (based on Rabbi Kahane’s video at the end) and because of the unholy words spoken about them (maybe reminiscent of the Secarii) and the Rabbis have a point, but such abusive language against them is also not good.

Their Rebbe is Rav Auerbach shlit”a, and I wonder what he will or will not say about their behavior. Maybe because he is in the hosp and they also have him in mind as they protest the gov’ts policies. Who will stand up against such a government?

They keep a watchful eye on Meir Ettinger and do not allow him to meet with the other young men.

What do you imagine Mashiach will do to squelch the Erev Rav, squelch the nations, and begin to build the Beis HaMikdash? Do you think this govt will willingly allow that to happen? Their infatuation with trying to be a country like all the non-Jewish countries of the world and their infatuation with not upsetting the non-Jewish nations (that Rabbi Kahane so eloquently spoke about) is detrimental and the opposite of being a Jewish Nation under the laws of Sinai.