TAKE THIS TO HEART . . . RETURN TO HASHEM IN YOUR MIND AND HEART

There are many uncertainties with this storm, primarily concerning its structure and intensification, but computer models are coming into agreement that residents from coastal Louisiana to the Gulf Coast of Florida should be paying close attention to weather forecasts during the next few days. Mashable 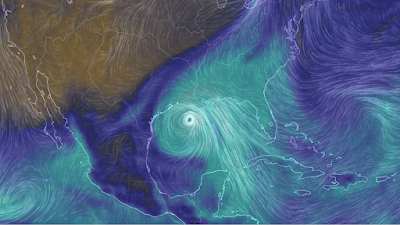 October 5, 2017: Many variables are at play right now, some will be instrumental in boosting Nate to the 'upper class' of Hurricanes. My prediction Nate will be a CAT 3 by late Saturday night in the Gulf of Mexico. "Brown Ocean Effect" to make Nate a CAT 3 Hurricane

October 5, 2017: **HEADS-UP** Louisiana is evacuating parts of New Orleans ahead of Tropical Storm NATE.
Look for this storm to intensify as it moves north into the Gulf of Mexico. Currently it has it sights set on a New Orleans landfall and it is already dropping mega rain. Louisiana making evacuations ahead of NATE - Already dropping 20+ inches of rain!

Meteor/Fireball crashes into White Mountains starting huge wildfire! October 4, 2017: "FIRE IN THE SKY NEWS" /
A meteor is being blamed as the possible cause of a out of control wildfire currently burning high in the White Mountains of New Hampshire.  A local resident reported seeing something fall from the sky that night when the wildfire broke out. http://www.unionleader.com/public-saf...

*The Holy One, Blessed is He, has brought into the world a wind with an extremely powerful angel for the wind; without an angel, it will not move. The wind that struck Mexico and the United States, this angel moved it. It will move from one country to another to purify the world, so that the Jews will understand that they must immigrate to the Land of Israel. The sea too - an angel moves it. The Land of Israel is protected and guarded, and there will be no problems with the elements or any problem from any country in the world. Because every country that intervenes will be struck by the ten plagues of Egypt, a hundred times. The elements will continue to strike, strong earthquakes, strong floods, strong winds, strong fires, the sea will continue to run wild, to sink and overflow! And yet the Creator promised there will not be a flood like it used to be.

The mini solar system known as Nibiru - Hashavit will also appear and change the world physically. The globes and maps that put every country in its place in our minds and in our understanding, will all be changed. Where once there was dry land will be covered with deep water and the seabed will become land without water, but Eretz Yisroel will stay the same and untouched by the violence around.

All the activities of nature and anti-Semitism, volcano eruptions, floods, storms and winds, small and large tsunamis, accidents and very harsh natural disasters are all with great compassion.

The holy Land of Israel is Noah's ark, and those who live in the Holy Land are protected and guarded like in Noah's Ark

There will be severe earthquakes, severe tsunamis, half tsunamis and full tsunamis, severe fires, volcanic eruptions, accidents on ships, planes, trains and cars, and there will be natural disasters. There will be many mistakes in factories that manufacture or send missiles, many explosions inside.