October 23, 2017: Mt Rainier in Washington is showing signs of increased activity. Seismographs on the north side of the 14,000ft volcano show tons of activity


Active Volcano Mt. Rainer Shaken By 'Swarm' Of 23 Earthquakes ZeroHedge
Don’t panic - it's only an active volcano. What’s the worst that could happen? Some two dozen earthquakes have shaken Washington State’s Mt. Rainer over the past two weeks – but seismologists say people who live nearby shouldn’t panic.

“In the past, these swarms last a couple of days to a week or so and then die out,” said Paul Bodin, of the Pacific Northwest Seismic Network at the University of Washington. The first of the 23 quakes struck on Sept. 11 near the volcano’s summit. The largest of the quakes registered magnitude 1.6. During the same period, Mexico experienced two of the deadliest earthquakes in decades. 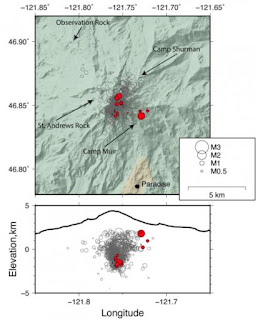 According to the Seattle Times, earthquake swarms typically don’t signify that an eruption is imminent.