Joshua describes a solar eclipse on October 30, 1207 B.C.E., over 3,220 years ago.
Biblical Record of Eclipse 3,200 Years Ago May Rewrite Pharaonic Era in Ancient Egypt 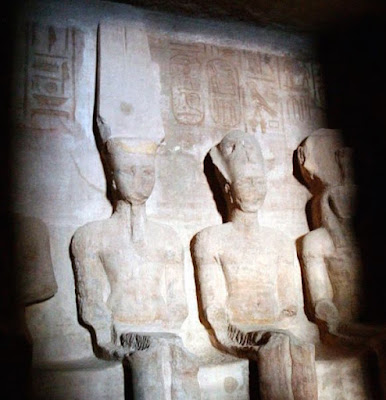 Then spake Joshua to the Lord in the day when the Lord delivered up the Amorites before the children of Israel, and he said in the sight of Israel, Sun, stand thou still upon Gibeon; and thou, Moon, in the valley of Ajalon.  And the sun stood still, and the moon stayed." Joshua 10: 12-13

The Bible is replete with stories of miracles, and now at least one has been reinterpreted to exclude the deity. Joshua may have asked the Lord to make the sun and moon stand still, but scientists have reconsidered previous objections, and now think the Book of Joshua describes a solar eclipse on October 30, 1207 B.C.E., over 3,220 years ago.

The Gibeon eclipse isn't the oldest such reference in ancient writing – that apparently would be an eclipse of around 4,150 years ago that peeved the emperor in China, but it's one of the oldest.


Is the Bible a true story? A special Haaretz report.

The reinterpretation of event as eclipse rather than miracle, plus clues from ancient Egyptian texts, have led historians to redate certain Egyptian dynasties, notably that of Ramesses II (aka the Great) and his son Merneptah, Sir Colin Humphreys of the University of Cambridge and W. Graeme Waddington report in Astronomy and Geophysics.

Did a frog eat the sun?

To begin with the theory of eclipse rather than miracle, the authors suggest that rather than the sun and moon stopping in their celestial tracks, including based on the original Hebrew word, "a plausible alternative meaning is that the Sun and Moon stopped doing what they normally do: they stopped shining." This interpretation actually goes back at least a century, the authors themselves point out, to an article in the Princeton Theological Review of 1918.

"This interpretation is supported by the fact that the Hebrew word translated 'stand still' [dom] has the same root as a Babylonian word used in ancient astronomical texts to describe eclipses," Humphreys stated.

Still, the eclipse theory not only didn't gain traction, it was discredited, in part because scientists couldn't reconcile the dates of total solar eclipses to the postulated timing of the Joshua story. But if one relates to annular solar eclipses, that changes things.


The Merneptah Stele, which states:
"Israel is laid waste, its seed is no more.”

Not quite. Webscribe, Wikimedia Commons

During a total eclipse, the moon is relatively near the Earth and basically blots out the whole sun. During an annular "ring of fire" eclipse, the moon is relatively farther, does not completely cover the sun, and a ring of light remains screamingly obvious. It apparently took many millennia for our forefathers to distinguish between total and annular eclipses, not to mention to stop assuming a dragon or frog or some other beast had swallowed the light god.

Was there an annular solar eclipse in the right time frame for Joshua? There was, calculate the writers: on October 30, 1207 B.C.E., which is within the possible dates of Joshua's incursion into Canaan.

Having established that there was an annular eclipse on that day, we get to redating the pharaonic regimes of Ramesses the Great and his son Merneptah, to within a year.

While much of the Bible remains in dispute, third-party evidence of an ancient Israelite presence in Canaan between 1500 and 1050 B.C.E. comes from the Merneptah Stele.  That inscription dates to the fifth year of Pharaoh Merneptah, son of Ramesses the Great (aka Ramses). The stele describes Merneptah defeating the People of Israel in Canaan, ergo, the Israelites were definitely in Canaan by Merneptah's fifth year. The question is when that fifth year was.

Merenptah makes an offering to the god Ptah Chipdawes

Mainstream Egyptologists date Ramesses II's reign to around 1279–1213 B.C.E., and Merneptah's to 1213–1203 B.C.E. Others have suggested their reigns were decades later, and a whole new set of theories for ancient Egypt, called the “New Chronology,” puts Merneptah's fifth year at 867 B.C.E.
The new information indicates that the mainstreamers were closest all along: Merneptah's reign apparently began in 1210 or 1209 B.C.E. And Ramesses the Great, one of the most powerful pharaohs of the lot, ruled the roost from 1276 to 1210 B.C.E., plus-minus a year. His remains are on display at the Cairo Museum.

Family Finds Roman-era Stables Beneath Their Garden, Arrests Made Over Looting. Eilabun residents uncovered elaborate caves carved out of bedrock in ancient Galilean Jewish village, and allegedly robbed the site.

MIRACLE DESCRIBED IN BOOK OF JOSHUA MAY HAVE BEEN EARLIEST RECORDED SOLAR ECLIPSE – Solar eclipse viewed in Israel for last time until 2020
BY DANIEL K. EISENBUD OCTOBER 31, 2017 00:57
Researchers have tracked the eclipse to its exact date: October 30, 1207 BCE.


WHAT OUR TORAH SAYS:

Joshua Stops the Sun (1273 BCE)
On the third of Tammuz of the year 2488 from creation (1273 BCE), Joshua was leading the Jewish people in one of the battles to conquer the Land of Israel. Victory was imminent, but darkness was about to fall. "Sun," proclaimed Joshua, "be still at Giv'on; moon, at the Ayalon valley" (Joshua 10:12). The heavenly bodies acquiesced, halting their progress through the sky until Israel's armies brought the battle to its successful conclusion. (Yehoshua 10:12)


12  Then Joshua spoke to the Lord on the day when the Lord delivered up the Amorites before the children of Israel, and he said in the sight of Israel, "Sun, stand still upon Gibeon, and Moon in the valley of Ajalon.”

13  And the sun stood still, and the moon stayed, until the people had avenged themselves upon their enemies. Is this not written in the book of Jashar? (which is the Torah)? So the sun stood still in the midst of the heaven, and it did not hasten to go down exactly a whole day.

14  And there was no day like that before it or after it, that the Lord hearkened to the voice of a man, for the Lord fought for Israel.

15  And Joshua returned, and all Israel with him, to the camp to Gilgal.

Is it anything new that the same anti-semites as the rag newspaper, 'haaretz' etc. are still trying to defame Torah and our G-Dly history? Who cares what these anti-semites and Egyptian writings say? Everything outside of the Torah that tries to undermine G-D and His holy Torah are fabrications coming from their hatred and jealousy. We are at a time in history where the forces of evil are at its end and are working fast and hard to undermine Torah, G-D and the Jewish people. These are the Amaleikim of today. In every generation, they rise up to destroy us but the Almighty Hashem, our G-D and Creator of everything, saves us from their evil!

"And there was no day like that before it or after it..."

As there have been solar eclipses after that, it would seem that Torah is saying that it was a unique event - not a solar eclipse.

Neshama: Amen. Of course, I always say that science is only factual when it concurs with Torah. Actually, science is only theory until a fact is proven and then even that has to be revised as new facts and data come to light. Only Torah is pure Truth because it is Divine.

If you notice, science is being pushed on the public more and more, as technolgy advances and this way they think they can disprove the validity of Torah and G-D. This is part of an agenda.