The seventh day of the Jewish holiday of Sukkot, 21st day of Tishrei, is known as Hoshana Rabbah (Aramaic: הוֹשַׁעְנָא רַבָּא, "Great Hoshana/Supplication”). 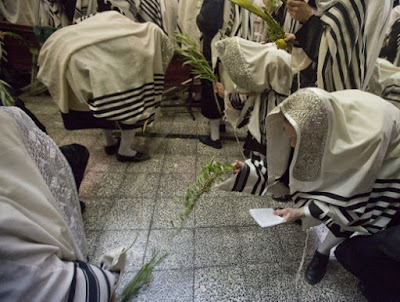 The seventh day of Sukkot, Hoshana Rabbah, is considered the final day of the divine “Judgment” in which the fate of the new year is determined. It is the day when the verdict that was issued on Rosh Hashanah and Yom Kippur is finalized.

The Midrash tells us that G‑d told Abraham: “If atonement is not granted to your children on Rosh Hashanah, I will grant it on Yom Kippur; if they do not attain atonement on Yom Kippur, it will be given on Hoshana Rabbah.” 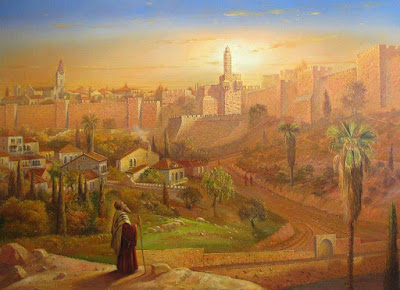 In consideration of the auspiciousness of the day, it is customary in many communities to remain awake on the night preceding Hoshana Rabbah. We recite the entire book of Deuteronomy, wherein the precepts to love and fear G‑d are expounded at length.

In certain communities, the entire book of Deuteronomy is read in the synagogue from the Torah scroll. After midnight, the entire book of Psalms is recited. In some congregations it is a custom for the gabbai (synagogue manager) to distribute apples (signifying a “sweet year”) to the congregants. These apples are then taken home, dipped in honey, and eaten in the sukkah.

Ancient Rituals From the Temple Worship

The daytime rituals of the holiday are drawn from the ancient rituals that were practiced in the Jews’ Holy Temple. In synagogue, male congregants make a circuit around the bimah, the central platform upon which the Torah is read, each man holding his the lulav and etrog aloft.

During the holiday of Sukkot, only one circuit of the bimah is completed. In contrast, on Hoshana Rabbah, congregants complete seven circuits. Each time represents one of the Seven Patriarchs: Abraham, Isaac, Jacob, Moses, Aaron, Joseph and David.

Following this ritual, it is customary to recite a liturgical poem, and at the conclusion of this, to beat five willow branches hard against the floor. This is to beat away the last vestiges of sin, but there are mystical nuances to the ritual known only to those who are deeply versed in Kabbalah.

"...The Vilna Gaon on the Mechilta (Shmos 14:20) says that the Gog U'Magog war shall begin three hours before "Hanetz Hachama" (crack of dawn) on Hoshana Rabba, and shall last three hours only.”

"It is also a verifiable prediction that according to Rav Yitzchak Kaduri's (zt”l) quotation of the Vilna Gaon that the final battle of Gog and Magog would begin on Hoshanah Rabba, the 7th day of Sukkot, in the first year of a Shmittah (Sabbatical) cycle.”

"Gog (12) and Magog (58) have a gematria (numeric value) of seventy which corresponds to the 70 nations Midrash Tanchuma, Korach 12. This seems to imply that Gog will rule over 70 nations, and all of them will join together against Israel (see Tehillim 118:110 and Zecharyah 14:2).”

"On this great day [of redemption], however, they will be saved from all of their enemies for all times = therefore, it will be called Hoshana Rabba, the great salvation... The Tur Arizal says, "On Hoshanah Rabbah, the war of Gog and Magog will begin." (Paraphrased)

ALSO: "The Tur (Orach Chaim 490) writes in the name of Rav Hai Gaon that the war will break out on Sukkos. See, however, Malbim to Ezek. 39:8 who writes that the timing of that war was never revealed to any prophet."

"There are 3 parts to the war of Gog miGog. This is based upon Midrash Tehillim. The first part coincides with the Holocaust and the detonation of the nuclear weapons over Hiroshima and Nagasaki. This is alluded to in Tikkuninim Chadashim of Rabbi Moshe Chaim Luzzato. It is also following the schedule of the redemption as outlined in Sefer Avkat Rochel of Rabbeinu Makir ben Abba Mori. The 2nd stage corresponds to Operation Desert Storm/Desert Shield. The 3rd and final stage called Operation Iraqi Freedom and the War in Afghanistan is what was mentioned by Rav Kaduri”

The writing from the Vilna Gaon are most likely referring to the sealed letter which the Gaon wanted opened 100 years after his passing. It can be found in the Rav Menachem Kasher edition of Sefer Kol HaTor entitled "HaTekufah HaGadolah". It was published in 1972 and is still available in print. This schedule is also discussed in Sefer Kol HaTor. [. . .]

The information is accurate and correct.

This view was not only held by Rav Kaduri. For those who remember, the nascent Sanhedrin produced a scroll that was to be delivered to then President George Bush warning him that he was the one foretold in the Prophets in the Tanach as being Gog mi'Gog. This scroll warned clearly that Bush needed to support Israel or G-d would deal with him severely. (See above link for Sources to this)
[. . .]

I have been looking through the Vilna Gaon's commentary on the Mechilta and have found nothing that explicitly states what is being asked. The commentary is called "Biyurim v'Haga'ot HaGra". I also checked his commentary "Kol Eliyahu" on Tanach. It is possible there is some larger, more comprehensive commentary.

What I have found is only an explanation of what the Mechilta itself says. Namely that the final redemption will parallel the redemption from Egypt. In this particular case, the splitting of the Red Sea and all the details of this are associated with the final stage of the conflict in the War of Gog miGog. This is explicitly associated with chapter 60 of Isaiah at the beginning. It also relates this to what happened with the judgement of Sodom and Gemorrah.

A little later in the Mechilta it mentions the view of Rabbi Eliezer who says that although the exodus from Egypt was in the month of Nisan, for various reasons, the final redemption will be in Tishrei. The Gra there doesn't say how he holds. He just explains Rabbi Eliezer's reasoning.

The judgement of the nations is sealed and execution begins from Hoshannah Rabbah. That is the explicit teaching of Rabbi Shimon bar Yochai as found in the Zohar on parshat Tzav.

So in context, if this judgement with Gog u'Magog parallels the timing of the splitting of the Red Sea, it would seem to be shortly before daybreak.

Looking simply at the timing, the beginning of the bombing in Afghanistan in the 2nd Gulf War started the night of Hoshannah Rabbah. That complies with the plain meaning from the Mechilta as understood by the Vilna Gaon.

[ME: However, we see there is now in 5777 a Build-Up by Russia and other nations seeming to be centered in and around the Mediterranean, involving Syria and the US. (See various websites for this.)]

This is also the explanation of how the final redemption unfolds as discussed in Sefer Avkat Rochel of Rabbi Makir ben Abba Mari, volume 1, Wars of King Moshiach, 8th sign. This is also brought in Targum Yonatan ben Uziel on Devarim 34:3.
Posted by Neshama at 8:16 AM

Parallel to the Splitting of the Red Sea: "And the Mount of Olives shall split in the midst thereof-toward the east and toward the west-a very great valley. And half the mountain shall move to the north, and half of it to the south. And you shall flee to the valley of the mountains,...."

Thank you Devash. I am so anxious for the coming days.

Please change to yellow font color darker. It is not legible. Thank you!

Fig, which yellow is not legible. There are two. One is title (bright) and the other is text (softer).
Maybe white would be better for the text? Please let me know.

we're in the second year of the shmitta cycle.

The yellow text and font here is the one that is easiest to read:
''The judgement of the nations is sealed and execution begins from Hoshannah Rabbah. That is the explicit teaching of Rabbi Shimon bar Yochai as found in the Zohar on parshat Tzav.''
I am anxious for the coming days too... or maybe we're just hoping too much.

So sorry to everyone, hope this is clearer.
Thank you Devorah.
Hoping too much is what is helping to bring it on!

True, Neshama about hoping too much. If only all Jews would start hoping and praying for Moshiach to come, he'd be here in a flash. Too bad so many of today's Jews are unaware of anything Jewish, r'l. May they awaken from their slumber.