I had the privilege during Aseres Ymai Teshuva of speaking at Yeshiva Zeev Hatorah in the Holy City of Yerushalayim. This is the makom hakodesh presided over by the illustrious Rabbi Shmuel Brazil shlita”h. One of the bocherim, a young man named Yoel Fingerer, asked a very interesting question. We were discussing Milchemes Gog Umagog and the contemporary conflict between Bnai Yishmael and Bnai Esav (see the Malbim on Yechezkel 32:15 and the introduction to my book, 2020 Vision). 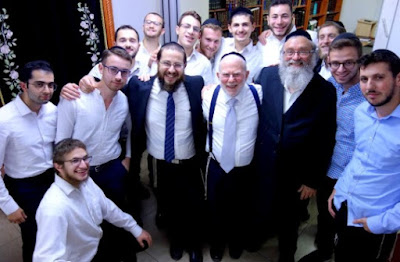 His question was, “How do the events surrounding North Korea fit into this scenario?”

There are remarkable parallels between current events and the events narrated in Parshas Noach.

The Generation of the Flood said to Hashem, “Leave us. We have no wish to know Your paths.” (Sanhedrin 108a) They “took for themselves wives from whomever they chose,” and their moral perversion influenced even to the world of animals. “Wherever you find immorality [mass destruction comes upon the world] and kills good and bad [people alike].” (Ohr Hachaim quoting Beraishis Rabbah 26:5 and Rashi)

“The Generation of the Flood transgressed everything [that they were commanded by G-d], but the decree of their punishment was not sealed upon them until they stretched forth their hands in robbery.” (ibid) As it says, “Now the earth had become corrupt before G-d; and the earth had become filled with robbery. And G-d saw the earth and behold, it was corrupted, for all flesh had corrupted its way upon the earth.” (Beraishis 6:11)

An arrogant person has no thought of punishment. Hashem’s Presence is not included in his world view; he follows his ways oblivious to any consequences. “During the one hundred and twenty years [preceding the Flood], Noach planted cedars and cut them down. ‘What is this for?’ he was asked. ‘The Sovereign of the Universe has said that He will bring a flood upon the world,’ he replied. ‘If He brings a flood,’ they said, ‘He will bring it only on your house.’ When Mesushalach (Noach’s grandfather) died, they said to him, ‘See, the deluge has come only on your house.’ They mocked him, calling him ‘despised old man.’” (Berashis Rabbah 30:7)

Although Noach explained to those who questioned him what Hashem was preparing, they were not interested. They were so devoted to their lifestyle that they could not see outside it. And so, from a distant place, the waters came. “In the six hundredth year of Noach’s life, in the second month, on the seventeenth day of the month, on that day all the foundations of the great deep burst forth and the windows of the heavens were opened. And the rain was upon the earth forty days and forty nights.” (Beraishis 7:11-12)

The punishment came from a place beyond the control of man, but it resulted from man’s actions upon the earth. The generation assumed there were no consequences for their actions. They did not want to know that, above them, was “a watchful Eye, an attentive Ear and all [their] deeds [were] recorded in a book.” (Pirkei Avos 2:1)

My friends, we must know that, tragically, today we live in a world which resembles the world before the Mabul. The nations pursue their own courses. They pass laws which institutionalize perversion and think there will be no consequences. Bnai Yishmoel and Bnai Esav plot against the Children of Israel and think there will be no consequences. They plot to steal Yerushalayim and think there will be no consequences. The list goes on and on.
As this transpires, there is a man in a distant country who seems to be living on a different planet. He does not march to anyone else’s step. He threatens the entire world and is oblivious to the rest of mankind. He seems beyond the control of any person or nation or logic. How do you speak to him? How do you approach him? Who is he? He seems to be driven by incomprehensible motives, yet he cannot be ignored.

Mankind has to know that there are consequences for our actions. If the laws that Hashem has established for all the children of Noach are ignored, then somewhere, somehow there will be consequences. We don’t know what those consequences will be, but there are always consequences. Hashem is patient, but it seems there is a limit, just as there was a limit in the days of Noach. The world can do teshuva, just as Nineveh did teshuva. Because they did teshuva, the people of Nineveh were saved.

What is really going on in our dark world? The light of Moshiach is being prepared.
“And so too, Hashem, grant honor to Your people, praise to those who revere You … and preparation of a lamp for the son of Yishai, Your Moshiach … speedily in our days.” (Yomam Noraim)


PICTURE CAPTION
Some of the bocherim from Yeshiva Zeev Hatorah with the Rosh Yeshiva, Rabbi Shmuel Brazil, shlita”h (third from right in the front row). The Mashgiach, Rabbi Leiby Ritholtz, is fifth from the right; the author is standing between them.

20/20 is known as nominal vision. Hindsight is referred to as 20/20. I'm wondering what the year 2020 will bring. I know the Jewish people do not use this calendar system, but others of us do. I'm thinking the Creator is using this calendar system right now because he is speaking to the nations that are coming against Israel. The nations that are trying to make Israel give up part of their boundaries for a so-called (but won't be long lived I'm sure) peace via a so-called two state solution (it won't be a solution it will only bring more trouble for Israel in the future). The Creator is taking his hand of protection off the nations that are doing this nonsense to Israel via UNESCO/UN etc.... There is a book called "EYE TO EYE" by William Koenig, it is enlightening about the weather disasters, fires, shooting etc., which have happened to the USA since we've stuck our noses into Israel's business and tried to make them make so-called peace with the middle east by pacifying the Palestinians who by the way were once offered the area where Jordan is now. I just wish William Koenig would update his book to show the latest hurricanes and fires, shootings in USA in 2017 and how they correlate with all of President Trump's son-in-law's meetings trying to still push this agenda through. He's meet with several middle east figures, as well as with Israel delegates. So I'm sure the dates of such meetings led to the forming of storms or the starts of fires etc.... Our Creator tries to punish us to show that he is warning us to come back to him and do things his way, but most do not listen.