Strange Giant Energy Spiral Spans Entire Pacific Ocean - Antarctica to Arctic Circle
August 7, 2017: A giant energy spiral spans the entire Pacific Ocean from S to N yet once again. Starting at approximately 18:00 UTC it appears to originate from Antarctica spanning to the N slightly NW. I have a new theory, its going to require some research but I think I may know why this is appearing. Thanks
http://tropic.ssec.wisc.edu/real-time…


Yellowstone Supervolcano SWARM - 1600 earthquakes and climbing
August 7, 2017: Super Volcano at Yellowstone update on the earthquake swarm. The quakes showing no signs of letting up and is at 56 days straight of continuous activity.
http://quake.utah.edu/special-events/…


Yellowstone Volcanic Alert-Elevated Earthquake Activity-Heatwave and Wildfire Chaos
Published on Aug 9, 2017
A Newsweek article published an alarming report that observers had recorded more than 1,500 earthquakes on the western edge of Yellowstone National Park as part of an ongoing “swarm” currently in its seventh week. The swarm began on June 12 and as of August 2 a whopping 1562 events have been registered by the University of Utah's seismograph station.

Dual Sky Light at Sunset from Fort Worth, Texas - East AND West Sky
August 12, 2017: This observation was made yesterday evening at sunset from Fort Worth, Texas. She is a long time resident of this area and has never before noticed this phenomenon, in fact said prior to seeing it with her own eyes was a little skeptical of dual light vids at sunset....she said she is no longer skeptical. Thanks Deserea

The Tunguska event is the largest impact event on Earth in recorded history. Studies have yielded different estimates of the meteoroid's size, on the order of 60 to 190 metres (200 to 620 feet), depending on whether the body was a comet or a denser asteroid.
Since the 1908 event, there have been an estimated 1,000 scholarly papers (most in Russian) published on the Tunguska explosion. In 2013, a team of researchers published analysis results of micro-samples from a peat bog near the center of the affected area showing fragments that may be of meteoritic origin. 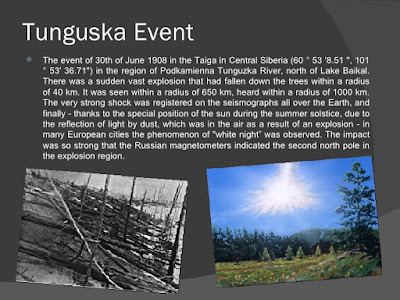 Don't really know what all this stuff is about, but the Rebbe MhM said many times that in the Redemption there will be a new heaven and a new earth. ????