A growing number of foods commonly found in kitchens across America
have tested positive for glyphosate, the herbicide that is the main ingredient in the popular consumer pesticide Roundup, which is widely used in agriculture. But few brands on that list are as startling as the latest: Ben & Jerry’s, the Vermont ice cream company known for its family-friendly image and environmental advocacy. 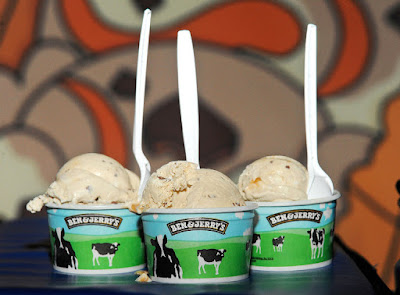 Of these flavors, only the Cherry Garcia did not show glyphosate traces, OCA said. The organization had already called on Vermont-based Ben & Jerry’s to start shifting to using only organic ingredients in its products or risk a national and international boycott. The OCA has also urged natural and organic food stores to drop the brand unless the ice cream giant commits to being completely organic.

“Ben & Jerry’s falsely advertises its products as ‘natural’ and its brand as ‘sustainable’ and ‘socially responsible.’ Nothing could be further from the truth. Ben & Jerry’s profits are built on the back of an industrial dairy system that poisons the environment and produces pesticide-contaminated food products. Ben & Jerry’s sales, driven in large part by its deceitful claims, damage the organic industry by cutting into the sales of authentic natural, grass-fed and organic producers,” OCA International Director Ronnie Cummins said in a press release on PRNewswire.com.

In response, a spokesperson from Ben & Jerry’s stressed that the company’s products are safe for human intake. “Even if the reported results are accurate, as the laboratory that conducted the test stated, a person would have to consume 145,000 eight-ounce servings PER DAY to reach the limit set by the U.S. Environmental Protection Agency,” Ben & Jerry’s spokeswoman Laura Peterson said in MassLive.com.

Rob Michalak, Global Director of Social Mission at Ben & Jerry’s, also said that the company is currently working to make sure all the ingredients taken from its suppliers come from natural sources that are free from genetically-modified organisms. The Ben & Jerry’s official also noted that the company is looking for cost-effective ways to ensure that their milk suppliers use non-GMO feeds.

“We’re working to transition away from GMO, as far away as we can get. But then these tests come along, and we need to better understand where the glyphosate they’re finding is coming from.

Early this year, Food Democracy Now! and The Detox Project had commissioned San Francisco-based Anresco Laboratories to carry out a series of laboratory tests to confirm whether glyphosate can be detected in commonly consumed processed foods.

The results showed that General Mills Cheerios had the highest glyphosate content among the products tested, sporting up to 1,125.3 parts per billion (ppb). Other brand name products that showed high glyphosate content included Wheaties, Trix, Kellog’s products and Oreo products as well as Ritz crackers, Doritos, Lays, and Goldfish crackers.

This is a worldwide problem. They have corrupted everything, literally. Most ice creams today put in corn syrup and that is why they can put them on sale for cheaper. Corn syrup is probably one of the worst of this roundup stuff. Important for everyone to read all ingredients first on their food products. There is a problem that most of the produce has been corrupted with the GMO's because there was so much use of it everywhere that it has affected even the non-GMO produce.

Whatever, one must try to buy organic only, if possible.

It is sickening what “they” are doing.
As far as I am aware, the only ice cream to buy is Haagen Daas, real cream, real ingred. but not halav yisrael.