TEXAS MANDATORY EVACUATIONS – NUCLEAR HAZARD SCARE
SE Texas rivers to RISE by 50ft (highest recorded level in history)
interesting comment at endofdays blog discussion of the FLOOD:  Harvey is from the root רוה meaning to saturate, as in:  כי אם הרוה את הארץ (Yishayahu 55:10). It usually comes with a positive connotation, since water is Chesed. But, as in Noah's days, the wicked deeds of the generation can cause the water to burst its boundaries and turn into Din. (also note the number 50)
FLOODING OF HOUSTON HAS BEEN REFERRED TO AS
“IN THE DAYS OF NOAH”
Reb Dov Bar-Leib said...The Nun Sofit in כִּי מִן-הַמַּיִם מְשִׁיתִהוּ. is like a 50 inch measuring stick facing downward, measuring the amount of water. Will the amount of rain reach 50 inches? The first plague of Blood in Mitzraim lasted seven days. This might not end until Friday.

August 28, 2017: The Brazos River and the Colorado River will rise by an astonishing 50ft in just a matter of hours, prompting immediate mandatory evacuations anywhere near these rivers. 35% of Ft Bend County is expected to be flooded. A nuclear power plant south of Bay City is also in the path of this historic flooding as it sits next to the Colorado River near Matagorda.


*Chemical Leak* spurs emergency "TAKE COVER"! - *Nuclear Reactors* in heavy flood zone!
August 28, 2017: La Porte, Texas had a brief scare when an emergency chemical leak spawned "hunker down/take cover" measures for citizens near the area of LaPorte, all of this as flood waters continue to rapidly rise.
STP Nuclear Power Facility is sitting right next to the Colorado river that is expected to reach record flood stage in less than 2 days. Will they reactors flood. That was the ultimate demise of the reactors at Fukushima, the flood waters overwhelmed their ability to keep the rods cool, losing control of the facility. Hopefully that will not be the scenario here.

One Weird Anomaly From the Flood
CBS News correspondent Omar Villafranca tweeted a photo from Houston as the ants formed a protective island in the high water. 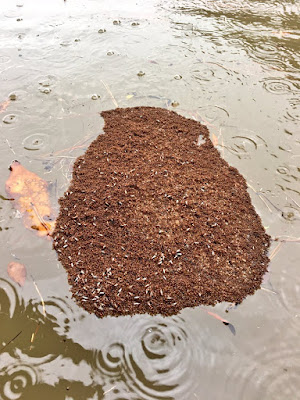