The Next Solar Eclipse in 2024: A Startling Message for the World

The Next Solar Eclipse in 2024: A Startling Message for the World
The mystical meaning of the next eclipse which is only seven years away.


Amazingly enough, the “totality eclipse” which took place this past Monday across the continental United States was not the end of the story. While eclipses of this magnitude are fairly rare occurrences – scientists tell us that if you stood in one place on earth you would have to wait on average another 360 years until you again saw another total eclipse – this time round is going to be different. A sequel is due a mere seven years later, on April 8, 2024. 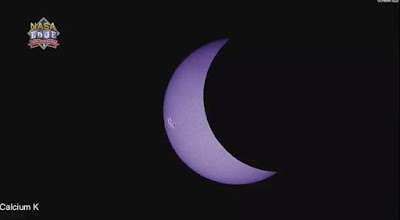 This proximity of time is almost beyond belief. It defies law of averages. It means that anyone who might have missed the blackout of the sun this year will have another opportunity to join the millions who shared viewing this magnificent cosmic performance on August 21 of this year.

But there’s something even more remarkable about this “double feature.”

The path of the eclipse in 2017 went from Northwest to Southeast, from Oregon to South Carolina. It reached its point of greatest duration a few miles south of Carbondale, Illinois. Totality lasted for two minutes and thirty-eight seconds. In 2024 the eclipse will wend its way in the opposite direction, from the Northeast to the southwest. There is one point however which will mark the intersection between this year’s eclipse and the one to come, the meeting of the two different paths across the United States, as if marking the center of a large X. It is precisely in the very same spot in Illinois where totality – the complete eclipse of the sun – will be repeated for the greatest length of time. That exact point where the 2017 and 2024 lines of totality cross is Cedar Lake in Jackson County, just south of Carbondale.

And here is the spooky part.

That geographic location has a name.
It is called Little Egypt!

How it got its name has a biblical source. It seems that in the mid-19th century there was a famine in northern Illinois. Thankfully, there was a bountiful harvest in the South. So the people in the North said that they felt themselves like the children of Jacob who in a time of famine were forced to go down to Egypt to seek food for their families – and the Carbondale region which saved their lives became known to this day as Little Egypt.

If you believe, as I do, that coincidences are but God’s way of choosing to remain anonymous and that they carry great significance as divinely inspired messages, it surely bears noting the remarkable link between the story of our original exile to Egypt and the “X marks the spot” Little Egypt location of the rare dual eclipses of our decade.

There is an all-important number associated with the Torah account of the Egyptian exile. It was in a prophecy to Abraham that God informed our patriarch of the time that would first bring darkness to his descendants: "You shall surely know that your seed will be strangers in a land that is not theirs, and they will enslave them and oppress them, for 400 years" (Genesis 15:13).

A solar eclipse is predicated on that very number. The sun, as the Bible told us, is larger than the moon: “And God made the two great luminaries: the large luminary to rule the day and the small luminary to rule the night…” (Genesis 1:15).] To be exact we know that the sun is exactly 400 times larger than the moon. How is it possible for the moon, so much smaller, to cover the sun to our eyes in an eclipse? That is because the sun is also 400 times further from us than the moon – a relationship of distance exactly parallel to that of size!

In the mystic tradition of Kabbalah the number 400 is meant to alert us to special meaning. It is the number 40 – the days Moses spent on mount Sinai, the days of the flood, and a host of other spiritually important moments – brought to the tenth power.

The relationship between the sun and the moon and the years predicted for the Egyptian exile share the number 400 so that we be attentive to a powerful divine message. An eclipse, the Talmud teaches us, is a heavenly sign. An eclipse of the moon, the rabbis tell us, is a bad omen for the Jewish people; an eclipse of the sun is a bad sign for the non-Jewish world. I dare to suggest that an eclipse across the continental United States of America linked to Little Egypt may well serve as a warning to the darkening of the American spirit – for the very same reason the children of Israel ended up in Egypt of old to shortly begin the era of their slavery.

The children of Jacob were guilty of a serious crime. It was the sin of hatred between brothers. It was the crime of the sale of Joseph which led to our first exile. That is what first darkened the pages of our national history as Jews. And that is what, post Charlottesville, darkens the story of American democracy. The cover of this week’s Time magazine carries the ominous headline “Hatred Across America”. More than a century after the Civil War, Americans are at war with each other – and after a little more than half a century past the Holocaust the barbaric cries of Nazi anti-Semitism and “let’s replace the Jews” are also incredibly again heard in our land.

If an eclipse does in fact have divine meaning, this must be a wake-up call. Little Egypt speaks to contemporary America just as ancient Egypt did for us as Jews throughout the ages. Egypt with either adjective, little or ancient, has always served as a tragic lesson for the consequences of enmity between brother and brother, between human beings all created in the same image of God.

In an eclipse, the sun continues to shine even if we are temporarily blinded to the rays of its goodness. God has not deserted us, nor will He ever do so. Eclipses are not curses; they are but warnings.

If we but heed their message, we may turn the eclipses of 2017 and 2024 into the blessings for which they were divinely intended.

What the article probably meant is the Kabbalistic idea of a full Partzuf of something multiplies it by 10 (for each of the 10 Sefirot). YAAK from yeranenyaakov