Thanks to a researcher’s unique system, 53 individuals in the Hebrew Bible have been proven as genuine historical characters through material evidence of their existence. The system’s creator, Lawrence Mykytiuk, an associate professor of library science at Purdue University, calls it “a way to develop historicity.” 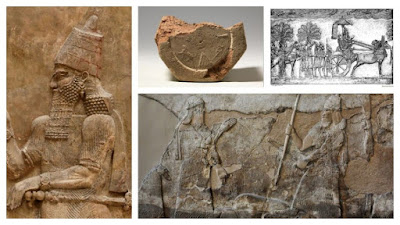 Biblical characters that Lawrence Mykytiuk claims to have verified. Clockwise, from left: Sargon II; Cuneiform prism describing the restoration of Babylon by Esarhaddon; a relief of King Sennacherib from his palace in Nineveh; Tiglath-pileser III from the palace at Nimrud. (Public domain)


It sounds like an unlikely project: a professor in the Midwest verifying ancient names from the Mideast. Yet Mykytiuk’s training as a librarian and interest in the Bible help him do what he says on-the-scene archaeologists are too busy to — pore through journals and books, scrutinize inscriptions discovered on digs and attempt to match names in the historical record with names in the Bible.

Mykytiuk’s system relies on three criteria: A biblical name must match the name on an authentic inscription, with no possibility of a forgery (thus ruling out items from the antiquities market, he said). The names — in the Bible and on the inscription — must match in terms of setting and time period. And, in perhaps the most exacting category, Mykytiuk looks for matches of at least three specific details identifying an individual, such as name, father’s name and title.

Mykytiuk’s oldest verification is another sovereign — King David himself, from 1000 BCE. He found a match between the protagonist of Samuel I and the “House of David” wall inscription at the Tel Dan excavations in northern Israel.

“‘King of Israel’ was in one line,” Mykytiuk said. “The next line read ‘Melech Beit David.’ It was in Aramaic, by the enemies, the Arameans, who conquered Tel Dan and indicated a victory monument, a stele, a big sign in stone. The Israelites reconquered it, and smashed [the stele] to pieces that they used to make a wall.”

“David is so important in the Hebrew Bible and the New Testament… If you want to verify anybody, he’s the guy,” he added.

Full interesting article can be found at TimesofIsrael
Posted by Neshama at 10:10 PM