An Assessment: IS AMONA BUILT ON "PRIVATE PALESTINIAN LAND”?

The Supreme Court granted on Sunday a request by the state and postponed the evacuation of the illegal outpost Amona until July 15. The state had asked the court for the delay because the new government has only recently taken office.

The three justices − Supreme Court President Asher Grunis and justices Esther Hayut and Hanan Melcer − did not explain their ruling. But the judges said the decision went “beyond the letter of law,” and ordered the state to report back to the court on the progress in executing the evacuation by June 13. Haaretz 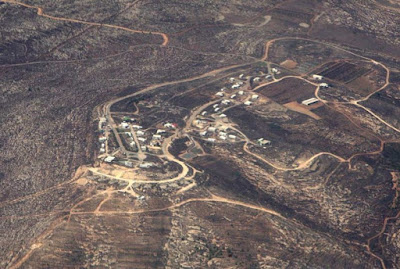 Amona was established in 1995 on a mountain overlooking the settlement of Ofra. Most of the land Amona sits on is private Palestinian property. JPost: Private land, state land or something else altogether 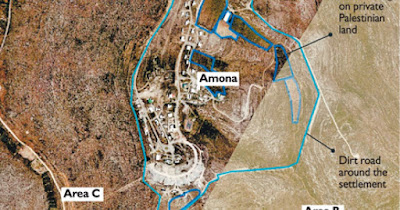 In Judea and Samaria, except for when the government so decides, the prevailing law enforced by the IDF is Jordanian. Hard to believe and even harder to accept. The following is a breakdown, in my estimation, of compounded errors that need to be addressed legally by the Knesset, and Government of Israel. The information was culled from an full-length article appearing in Israel National News

FIRST ERROR:
After the Six Day War in 1967, Israel placed the newly won areas of Judea, Samaria (the so-called 'West Bank'), and eastern Jerusalem under military rule, hoping to trade all or most of them for peace treaties. With a few exceptions, Jews were not permitted to live in Judea and Samaria and its status seemed to be temporary and unclear. Government policy was ambiguous, at best.

SECOND ERROR:
Based on legal advisors, the IDF commander ruled that the IDF would follow Jordanian law completely and exclusively, except where it conflicted with IDF rules and regulations. This was an administrative decision, not law, and exceptions were made, for example to apply Israeli law concerning VAT. But regarding land ownership, the Civil Administration (Minhal) followed Jordanian law.

LEFTISTS appealed to the High Court claiming that Jews had built their homes and property on “privately owned land.”

Their claims are based on massive land distributions that were carried out by Jordan during the early 1960’s in Judea and Samaria (the 'West Bank'). These arbitrary land grants were unconditional and, according to Mandate and Jordanian law, when recorded in the land registry, gave the recipients title and permanent possession. Most of the land was never used and no taxes were paid, which are required by Ottoman law, and therefore should have nullified any claims of ownership.

THIRD ERROR:
Claims of the LEFTISTS were in error because – Jordan’s occupation of Judea, Samaria and parts of Jerusalem was illegal [. . . .]

1. The Area of Jurisdiction and Powers Ordinance (1948) requires that Israeli land laws be applied to "any part of Palestine which the Minister of Defense has defined by proclamation as being held by the Defense Army of Israel." According to late attorney and legal expert Howard Grief, this law “was enacted for the sole purpose of recovering for the Jewish State those lands that had been recognized as integral parts of the Jewish National Home under international law in 1920 and had always been considered the patrimony of the Jewish People."

2. The Emergency Regulations (Cultivation of Waste [Uncultivated] Lands) Law (1949) “authorizes the Ministry of Agriculture to declare lands as ‘waste’ lands and to take control over ‘uncultivated’ land.”

3. The Emergency Land Requisition (Regulation) Law (1949) authorizes the requisition of land when it is “necessary for the defense of the state, public security, the maintenance of essential supplies or essential public services, the absorption of immigrants or the rehabilitation of ex-soldiers or war invalids.”

FIFTH ERROR:
Since the Israeli government has not annexed or extended Israeli law to these areas, they remain under the sole jurisdiction and authority of the IDF. Ironically, the IDF, which represents the State of Israel, implements Jordanian law -- with the approval of the High Court. Recently, the High Court went even further.

SIXTH ERROR:
Chief Justice Beinish declared that land which was not designated as State Land was automatically “private Palestinian land,” regardless of whether it was claimed and used by Arabs and properly evaluated, or not. This follows Jordanian law, but, unilaterally, the former Chief Justice made it Israeli law.

GLARING GOVERNMENTAL COGNIZANT DISSONANCE:
Why does Israel implement an anti-Jewish, anti-Zionist anti-democratic legal system? Claiming to uphold the “rule of law,” the IDF and High Court are gutting the fundamental values and purpose of the State.

Since Jordan renounced all claims to the "West Bank” in 1988 and signed a peace treaty with Israel in 1994 which defined the international boundary as the Jordan River, why does the IDF accept and implement Jordan’s illegal system?

the IDF and the High Court are promoting and giving official sanction to the canard that “Israel (i.e. Jews) is stealing Palestinian land.” This should not be the message of those who represent the State.


GOVERNMENT CAN REVERSE THE COMPOUNDED MISCONCEPTIONS AND SET THE RECORD STRAIGHT VIS-A-VIS THE ARABS:
Since this is a mockery of the rule of law, this policy can be changed legally, by Knesset, or by a government decision.

BOTTOM LINE:
In short, the Israeli government needs to begin acting like the Government of the State of Israel (and not the government of Jordan)
Posted by Neshama at 5:01 PM

How sad that insanity rules at this time. If all this wasn't so tragically stupid, it is really laughable. Why win the war and give away what is rightfully yours anyway to the ones who waged this war against us? As the Torah tells us 'from within your midst will come your worst enemies'.