America is About to FREEZE

Cold Records are going to be SHATTERED!

- “By the end of NEXT week, some states will be running 36 F BELOW NORMAL."Meteorologist Paul Dorian of Vencore, Inc.: WIDESPREAD BLAST OF COLD AIR PLUNGES FROM ALASKA TO THE WESTERN US EARLY NEXT WEEK AND THEN EXPANDS INTO THE EASTERN US** ClimateDepot 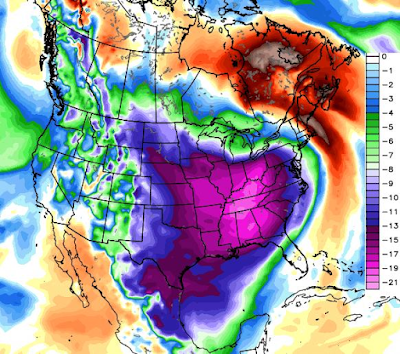 While we end November on a warm note here in the eastern US, there are changes unfolding across the Northern Hemisphere that will likely bring a widespread very cold air mass into the US next week. This cold air mass is first going to arrive in Alaska this upcoming weekend with some spots in that state plunging to 40 degrees below zero and way below normal for early December. After that, the cold air dives into the western US during the first half of next week and then it’ll likely blast into the eastern US late next week. In fact, by the time Saturday, December 10th rolls around, there may be colder-than-normal conditions all the way from Alaska to the southeastern US. Beyond that, it looks like this colder pattern will indeed have some staying power as we move deeper into the month of December.