This is dead serious!


'The L-rd your G‑d is a consuming fire" 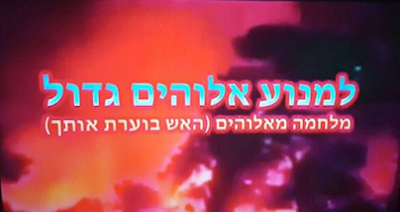 If you think that these fires were just a *revolt, THINK AGAIN. We here on Earth, in Eretz Yisrael, are receiving Divine Messages about our situation and the Geulah.

The time is nearing the 6000 year mark, the redemption, the ingathering of exiles, the resurrection of Neshomas, the announcement of Mashiach, the rebuilding of the Third Temple, must all occur BEFORE 6000. We are now in 5777, which is ONLY 223 YEARS until the END OF TIME as we know it. The time is drawing near and Am Yisrael is not ready.


When you look at the Map of the Arson Fires (Ember Bombs) it is undeniable that they were started to scare and kill Jews by EISH. The telltale signs are the places that were consumed by fire. Just look at the Map below and you will see the Fingerprint of the Arsonists – Jewish communities, and especially the city of co-existence [as Rabbi Mizrachi explained:]

Do you see Arab towns being scorched on this map?  As a result, one can narrow the investigation down to the Israeli Arabs being the arsonists (Rabbi Mizrachi). The Israeli Arabs that Leftist Israel coddles and fears, pays them to have children, and sends them to college to then to work in our Jewish hospitals and businesses. These same Israeli Arabs that bite the hand that feeds. 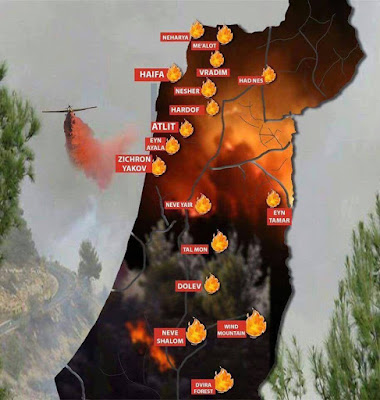 *Revolt:  This is not just the hacking into a TV station with DIVINE RETRIBUTION message from our cousins.

More Punishment: After Fire, Comes Flood: Israel Braces for Heavy Storms and Rains – Winds, rains and floods expected in Israel in the coming days, especially in Haifa, which was recently hit by brushfires; snow could fall in Golan Heights.

Eye Opener: In Wake of Fire, Haifa's Famous Jewish-Arab Coexistence Threatens to Go Up in Smoke.  A senior firefighter says local Arab politicians 'set fires in the morning and come to be interviewed at night’

Netanyahu thanks Palestinian president for assistance AND MEANWHILE –

Abbas declares: We will never recognize Israel. PA chairman and Fatah leader declares the Palestinian Arabs will never give up their fight against "Israel as a Jewish State”. Palestinian Authority (PA) chairman Mahmoud Abbas, is also the newly elected leader of FATAH and the Palestine Liberation Organization(PLO).

Items culled from Haaretz and Arutz Sheva.
Posted by Neshama at 2:22 PM

223 years until 6000. 223 is the gematria of "Ayn Od Milvado" Hashem willing, the next 223 years, starting with now, is the era of showing the world Ayn Od Milvado...which is the tafkid of Moshiach.