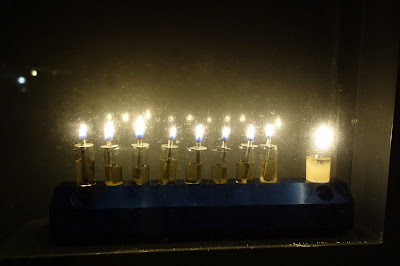 Techias Hamaisim must be a very important inyan. It is the subject of the second bracha in Shemoneh Esreh, which we say at least three times every day.

Chazal emphasize that Hashem’s strength is demonstrated by the resurrection of the dead.

Awareness of techias hamaisim enables us to overcome the vicissitudes of life. With this knowledge we can act correctly, because we will apply the perspective of eternity rather than the confusion of the moment. We say every day, “shelo asani oved.” If we bind ourselves to the Master of the Universe, we can never be enslaved by anything in this temporal world.

Which brings us to the theme of both this week’s Parsha and the Yom Tov of Chanukah.

There is a passage in this week’s Parsha which shakes me to the core. Yosef was locked in a dungeon. Sold by his brothers. Lost in an alien land. But the yeshua never comes the way you expect it to come.


“How great are Your deeds, Hashem! Your thoughts are exceedingly profound. A boor cannot know, nor can a fool understand this!” (Tehillim 93)


“The sar hamashkim spoke up before Paro … ‘There, with us [in prison] was a Hebrew youth, a slave ... and he interpreted our dreams.’” Observe how the Ribono shel Olam “raises the needy from the trash heaps” (Tehillim 113) in the blink of an eye. “They rushed [Yosef] from the dungeon … and he came to Paro….” (Beraishis 41:12ff) In a microsecond he is lifted from the dungeon to the throne!

What is the connection with Chanukah?

During Chanukah, we sit in darkness. It is deep winter. The land is frozen and dead. The nights are long and black. The moon wanes and then disappears (unlike any other Yom Tov). During the original Chanukah, not only the armies but the ideas of Greece all but ruled Am Yisroel. It seemed that the legacy of the Avos and Imahos was crushed, with no hope of redemption.

Then a light appeared, one flame, a tiny flame in the blackness. Was it real or illusion? Then two lights. It must be real! Then three. Suddenly the blackness is challenged. By the eighth day, not only has light sprung up from the earth but a new light is visible above, as the crescent moon pierces the sky. Hashem seemed to be telling us that, if we bring light to the earth, He will save us with light from Shomayim.

My friends, we are now crushed in darkness. But there is a way out! Hashem is really going to rescue us! We have to light the light and challenge the darkness. We have to imitate the deep integrity and anivus of Yosef ha Tzaddik.

Can we comprehend the courage it took to say these words before the man who believed himself to be a divinity and seemed to hold Yosef’s life in his hands? Yosef did not bow to the sheker. If we refuse to bow to the current world of sheker, Hashem will also save us!

Every week, there is a dark moment: Motzae Shabbos, when the neshoma yesaira has departed. We celebrate a meal at that time called Melave Malka. At this seuda we nourish the “luz” bone, from which we will be recreated at techias hamaisim. (See Mishna Berurah 300:1)

Redemption emanates from darkness. Rabbi Naftali Jaeger Shlita”h, Rosh Hayeshiva of Sh’or Yoshuv, explained, in the name of the Sefas Emes, that possuk 24:16 in Mishlei – “Ki sheva yipol tsaddik v’kam” – should be understood “because” the righteous man falls, he will arise. It is not “in spite of” the fact that we fall but because we fall! If we pull ourselves by the strength of the Ribono shel Olam then we will arise!

I heard an amazing story. A few years after the Holocaust, a bedraggled group of survivors from Europe arrived in Israel by ship. Having lost everything, they felt helpless and hopeless. They heard that the Belzer Rebbe, who himself had lost almost his entire family in the war, was in Tel Aviv, and decided to go to him for chizzuk.

This is what he told them: “Do you know where in the Torah we find a reference to techias hamaisim? Our rabbis found a hint in the Song that the Children of Israel sang at the Red Sea. The words ‘oz yoshir Moshe’ imply a future redemption after our final escape from our enemies at the end of history. In other words, Moshe ‘will’ sing a song in the future in addition to the song he sang at the Red Sea.

“But why did the Torah insert the hint at this particular place? It could have been anywhere.

“The Children of Israel had just emerged from Mitzraim. During the Makah of Choshech, four-fifths of Am Yisroel had died, apparently because they were reluctant to follow Moshe Rabbeinu. Imagine! Every person was mourning! All of them had lost close family members! And then they arrived at Yam Suf and sang shira!

“How is it possible that a Nation in mourning should be able to sing Shira to Hashem? How can one person, let alone an entire nation, be transformed in one moment from availus to the highest level of simcha? The answer is that, at that very moment, the concept of techias hamaisim was revealed to them! Those who had left them would come back!”


“Ele v’rechev … Some with chariots and some with horses, but we, in the Name of Hashem, our G-d, call out! They slumped and fell, but we arose and were invigorated! Hashem save! May the King answer us on the day we call!” (Tehillim 20)


A lichtige Chanukah to Klal Yisroel!

Thanks! I needed that.