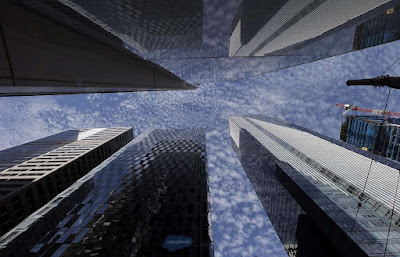 SAN FRANCISCO (AP) — The European Space Agency has released satellite data that shows the 58-story Millennium Tower in San Francisco's is continuing to sink at a steady rate — and perhaps faster than previously known. Scientist Petar Marinkovic who analyzed the data for the ESA said Monday it shows the Millennium Tower sunk 40 to 45 millimeters — or 1.6 to 1.8 inches — over a recent one-year period. Sfgate

I don’t know about you, but when I look at the above photo of the skyscrapers on the earthy edge of San Francisco, I wonder why these humongous buildings were built so close together, these uniquely heavy concrete and iron and glass monoliths weighing heavily on the soil at the water’s edge.  And with the visitors to our solar universe causing earthquakes, floods, meteors, volcanos etc., it is no wonder that this Millennium Tower is SINKING.