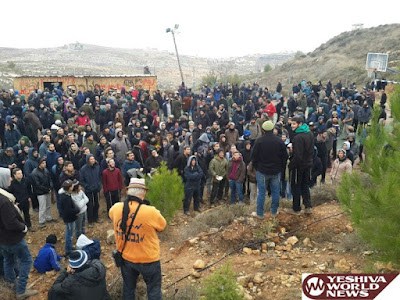 
Amona is Another Opportunity to Tar the Entire Settlement Enterprise as Criminal
www.davidmweinberg.com


http://www.jpost.com/Opinion/Know-Comment-Those-who-take-pleasure-in-pummeling-Amona-475555
I am experiencing déjà vu as the Amona saga moves toward a heartrending end, because of old hateful rhetoric that has been released into public discourse.

Left-wing rabble-rousers have peppered the debate over Amona with settler-hating epithets such as “land robbers,” “lawbreakers,” “violators” and “corrupt manipulators.”
Hundreds of seething academics have published fervid anti-Amona petitions in the newspapers.

Listening to some of these spokesmen on radio this week you could feel the hatred oozing from every pore of their enlightened democratic souls and legally-pure minds.

Anything related to settlers, settlements and the Netanyahu government draws out the ghastliest poisons. There was no sympathy expressed for the plight of Amona residents – who settled there with full government support and on the understanding that the State of Israel had title to the land.

Instead, I smelled the whiff of pogrom. I could almost hear the sharpening of pitchforks with which to impale the settlers of Amona, and the spinning of wool for torches with which to burn their homes to the ground. I could sense the glee of radical leftists at the looming spectacle of mounted special-forces policemen charging at settler women and children and bashing their heads with batons, as happened previously in Amona (2006) and Migron (2012).

This is dreadful. Only those whose hearts are closed, and whose who ideological hatreds have overwhelmed their judgment, can speak and think this way.

THE ISSUE FOR the hard Left, of course, is not the upholding of Supreme Court decisions or the rule of law – although that is what they swear the current controversy is all about. Neither is it the issue Palestinian land rights, to which they also swear fealty.

I know this because the political Left has gone back to repeatedly challenge “irrevocable” Supreme Court decisions when it suited its agenda (over immigration-infiltrator legislation, Beduin land evacuations, and the natural gas deal, for example). I know this because even the left-wing NGOs that petitioned the High Court over Amona know that no Palestinian ever lived there, or will.

So again, the vehemence that has accompanied the assault on Amona can’t be explained by slick reference to principles of “upholding law” and “protecting the Supreme Court.”


Rather, the issue for the ideological haters that came out of the woodwork this month is the uprooting of the settlement movement life’s work; the destruction of the power of the ideological right-wing, especially the national-religious right-wing.

Tearing down an icon of the settlement movement – that is what this is all about.

I recognize, of course, that the case specifics of Amona are different from previous settlement controversies. This is not a rerun of the Gaza disengagement in 2005, when an ideologically left-wing government was making a distinct diplomatic move, without any concern whatsoever for the fate of the Zionist pioneers in Gush Katif.

The Netanyahu government of today, by contrast, is deeply sympathetic to the settlers, and has worked hard to solve the crisis within the narrow straights forced upon it by the court (although perhaps not hard enough). And it is moving toward “regularizing” land issues in Judea and Samaria so that hostile actors can’t easily pull legal shtick to retroactively delegitimize entire neighborhoods over the Green Line.

But for the hard-core combatants of the Left, Amona is something else altogether.

JUST AFTER THE disengagement from Gaza, I accompanied a group of Canadian newspaper editors on a tour of Israel. We met with, among other, the man who at the time was the editor-in-chief of Haaretz, David Landau. Landau explained to the Canadian journalists why he thought the unilateral withdrawal from Gaza was a good thing.

It’s not because Israel freed the Palestinians from occupation, he said. And it’s not because the Israeli army won’t have to patrol any more the alleyways of Jabalya refugee camp, he said.

The reason why he, David Landau, thought that the disengagement from Gaza was a great and historic thing was


“because we tore down the settlements of the national- religious public and we crushed the political power of religious Zionism!” he thundered.


I heard some of that thunder and animus again this week in the execrations of hardleft spokesmen celebrating their imminent “victory” over Amona. How disgusting. How tragic.

David M. Weinberg is director of public affairs at Bar-Ilan University's Begin-Sadat Center for Strategic Studies, and senior advisor to The Tikvah Fund in Israel. He has been senior advisor to deputy prime minister Natan Sharansky, coordinator of the Global Forum Against Anti-Semitism in the Prime Minister's Office, spokesman of the Herzliya Conference on National Security, and spokesman of Bar-Ilan University.

Comment to this article:
Thanks, David Weinberg, for a brilliant article. Like Mr. Weinberg, my heart bleeds for the Amona residents, who have been offered alternative housing close by, but without a firm commitment from the government that they will not be evicted from the new housing after a short period of time. What the Amona community is facing is the possibility of two evictions, (if the second eviction from their new housing cannot be avoided), and it is not surprising that they rejected this proposal.

The unfairness of the eviction seems very obvious, when bearing in mind that "that no Palestinian ever lived in Amona, or will", but were settled quite comforably in nearby villages, until they were coerced by left-wing (Jewish) organisations, like Yesh Din, etc., to insist that they had rights to the land, and therefore the Jews, who had lived there for 20 years would have to be thrown from their homes.

I totally agree. These "ideological haters" (regrettably helped in their goals by the left wing Supreme Court) are disgusting, and can be called traitors to the state.

Netanyahu: Demolish illegal Arab Construction
Prime Minister Netanyahu orders that the law be enforced over illegal Arab construction without double standards.
http://www.israelnationalnews.com/News/News.aspx/221814
During the discussions, Netanyahu instructed the relevant officials to work to issue demolition orders for the illegal structures, located in Arab towns in northern and southern Israel, as well as in eastern Jerusalem. “There will be no double standards regarding construction,” […] “There will be equal enforcement of the law in Israel for both Jews and are Arabs.”

Comment to this article from DBL:
France might be leaning to vote in the UN in early January, but the Invented People are open to either possibility, December or January

Now this is what keeps Bibi up at nights because he has no faith. So rather than taking decisive action to nullify the Supreme Court ruling dealing with Amona, he worries and dithers about the upcoming UNSC vote. That upcoming vote causes him to freeze and wither because Mi SheMa'amin lo mefached (The one who believes is not afraid) while those who don't believe freeze up and wither before Mankind.


Demolishing a community is worse than desecrating the Sabbath'
Former MK Yaakov (Ketzaleh) Katz says the solution for Amona was “a total lie”.
http://www.israelnationalnews.com/News/News.aspx/221821
The whole outline is a lie, there is no Regulation Law, Netanyahu promised but did not keep his promise,” he said. “Even if the Regulation Law passes, the Supreme Court will overturn it as it did with the Arutz Sheva Law. The Knesset passed the law, but the Supreme Court canceled it and imposed harsh decrees on us.

"Netanyahu does not want the Regulation Law, and I do not know if he secretly made an agreement with Bennett and Attorney General [Avichai] Mandelblit that the law will not pass. The public is not buying a ripoff,” continued Katz, who said that he believes that demolishing a community is more serious than desecrating the Sabbath.

1,500 Youths Arrive At Amona During The Night and Among those present is former MK Dr. Michael Ben-Ari, a follower of Rabbi Meir Kahane HY”D
Ben-Ari feels the residents understand the deal is nothing but “empty promises”, adding “Ofra is Eretz Avos, Gideon… People are still living in caravillas from Gush Katif. We have learned a lesson. There is something about standing on one’s principles, even if it is taken away by force, but standing on that which one believes instead of compromising…Look what occurred in Migron and the Ulpana area of Beit El. Netanyahu and the exact same plan as [former Likud MK Tzipi] Livni [of Machane Tzioni]. He wants to create a State of Palestine between Shechem and Ramallah and this is his master plan, which he no longer hides. Let the world see that an entire yishuv is being uprooted by a so-called right-wing government. Let us see the reality as it is and not try to claim there is a difference between Netanyahu and Livni”.

What should be made clear is that there is no such thing as a left wing person or organization that is 'Jewish'. The ideology is completely foreign to Judaism in every single respect. These criminals are either non-Jews or Erev Rav. No matter what their names and their language, they are not descendants of Avraham, Yitzchak and Yaakov. At least this point should be made clear. Also, there is never a 'right wing' government in Israel, all external trappings.