[…] The boom was lowered on the Haredi community in the form of denying daycare to the children of some 18,000 families where the husband is studying full time in a yeshiva. According to Finance Minister Avigdor Liberman, these families will lose their daycare subsidy as of September 1. 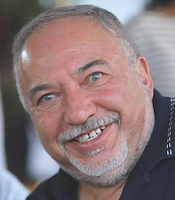 look at those eyes!

a little crazed, no?

Starting on the 82nd anniversary of the Blitzkrieg, enjoying the daycare centers for free will require a prerequisite of both parents maximizing their earning capacity. Since yeshiva and Kollel students rely on stipends and certainly aren’t out there hustling for a buck, they’ll have to find a new source of funding for their kid’s daycare. Meanwhile, their wives, who are the chief beneficiaries of the free daycare that allows them to drop off the children and go to work, will have to stay at home to care for them.

It means that about 21,000 children in about 18,000 families where the father of the family is a student at a yeshiva will stop receiving about NIS 1,000 ($305) for daycare. The new clause regarding maximized earning capacity will not affect the eligibility of the children for a daycare where the state controls the rate of tuition, only the subsidy from the state. These families will now have to pay out of pocket between NIS 2,070 and NIS 2,700 ($633 and $825), depending on the age of the child.

The net gain to the state from this cut is estimated at an annual NIS 400 million ($122 million).

NO MORE FOR LIEBERMAN

. . .and NO WHITE STEAKS for his Bolshevik tastebuds

as in WWII Labor Camps

Knesset Cafeteria DO NOT SERVE LIEBERMAN

Area kiosks DO NOT SERVE LIEBERMAN

Anywhere Lieberman goes for something to eat, DENY HIM

To his ‘friends’ DO NOT GIVE HIM A MORSEL OF FOOD

. . . Until he reinstates Yeshiva Kollel students’  “childcare grants” for food and sustenance!!

AT LEAST SOME OF THE TEN % OF JEWISH ISRAELI INCOMES SHOULD GO TO SUPPORTING TORAH YESHIVA STUDENTS, even if parents also support them. THAT IS ALSO TZEDAKA
THIS IS WHAT LIEBERMAN SHOULD ENACT.

This guy surely has the soul of an Erev Rav. It's one thing to live his life as he wishes but to be on a constant warlike mode against G-D and His Laws in His (Hashem's) Land, is a trait so ugly, there are no words!