Keeping Our Minds and Hearts on This Week . . . Before Tisha B'Av

We are in the those tumultuous days during the First Temple Period, of the attack on the First and Second Betei Mikdash of Jerusalem, with bedlam inside the walls, children, men and women starving, factions fighting with each other and fearing the finality.

How many of us can really empathize with our ancestors in their days before the death and destruction of the beautiful life that existed when the Beis HaMikdash was standing, when korbonos were a daily event, when the three festivals brought everyone together in Yerushalayim, after walking a long way from many communities in Eretz Yisrael.

Who could fathom the culmination of these biblical days. 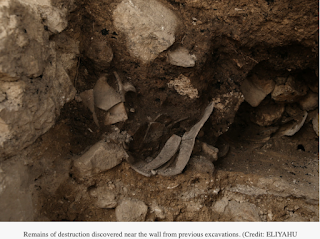 However Hashem had to bring to an end the division and makloket between His Children. He had sent them many signs, and had Neviim castigate them pleading for them to return to the ways of our Mesorah.

Hashem’s Rochmonus was to destroy the stones and not the Jews, but our enemies took advantage and delighted in our downfall.

The situation is not much different. We are living today in a deep darkness of confusion. Common decency and immorality are rampant. Many have lost their way, and have become enmeshed in the foreign nations. Many who we believed and trusted have been exposed as Erev Rav and Amalekim, scheming and working against us.

Hashem has sent us “signs” to take hold of,  to bolster our Emunah and strengthen our Bitachon. 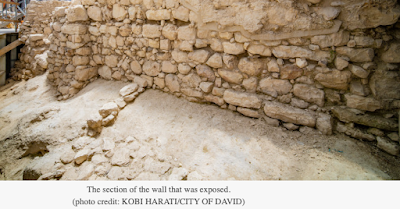 Our days are coming closer to the Final Redemption.

Now is the time for mourning that which we have lost and what the world has lost, and what our people have experienced these thousands of years.

We all want this to end, to end in the Redemption like Mitzrayim, but first we must come back to Hashem and confess that we have strayed from Him and His Torah Guidance. Those of us who can speak to Hashem from the heart, should do so and beg forgiveness and place His Rachamim on His People to bring us up and out and into His Light.

In just a few days, we will be sitting on the floor, crying for our trans-gressions that have kept the Third Beis from being built.

Without a Temple on the Mountain the world is in deep deep trouble.

Today, Hashem is helping us reveal so much of our early days.

The missing section of the First Temple City Wall of Jerusalem was exposed at the City of David.

According to the directors of the excavation, Dr. Filip Vukosavović of the Ancient Jerusalem Research Center and Dr. Joe Uziel and Ortal Chalaf on behalf of the Israel Antiquities Authority: "The city wall protected Jerusalem from a number of attacks during the reign of the kings of Judah, until the arrival of the Babylonians who managed to break through itand conquer the city. The remains of the ruins can be seen in the archaeological excavations. However, not everything was destroyed, and parts of the walls, which stood and protected the city for decades and more, remain standing to this day. “

The new section that was exposed connects two sections that were previously excavated on the eastern slope. In the 1960s, British archaeologist Kathleen Kenyon uncovered a section of the wall in the northern part of the slope and dated it to the days of the Kingdom of Judah. About a decade later, archaeologist Yigal Shiloh uncovered a long section of the wall, in excavations in the southern part of the slope. Over the years, claims have been made that despite the impressive nature of the remains, these remnant stone structures should not be seen as wall remains. However, with the uncovering of this new section that connects with these past discoveries, it seems that the debate has been settled, and that this was unequivocally the eastern wall of ancient Jerusalem.

Reconstruction of the sections that were dismantled during previous excavations in the early 20th century, makes it possible to trace almost another 30 meters of the surviving wall to a height of 2.5 meters and a width of up to 5 meters. In the book of 2 Kings, 25:10, there is a description of the conquest of the city by the Babylonians:

“The whole Babylonian army under the commander of the imperial guard broke down the walls around Jerusalem.” However it looks like the Babylonians did not destroy the eastern wall, possibly due to the sharp steepness of the eastern slope of the City of David, which slopes towards the Kidron Valley at over 30-degree angle. The findings of the destruction can be seen in the building that stood next to the wall and were exposed during the previous excavations: inside the building, rows of storage jars were discovered, which were smashed when the building burned and collapsed. The jars bear "rosette" stamped handles, in the shape of a rose, associated with the final years of the Kingdom of Judah. Near the wall, a Babylonian stamp seal made of stone was unveiled, depicting a figure standing in front of symbols of the two Babylonian gods Marduk and Nabu. Not far from there a bulla  (a stamp seal impression made in clay) was found bearing a Judaean personal name “Tsafan".

The findings of the excavation will be presented this coming October at the Israel Antiquities Authority's conference "New Studies in the Archaeology of Jerusalem and its Region" .

Must commend Neshama on the very special videos you seem to be able to get hold of. Love them; a picture is worth a thousand words, is the well known phrase. Love these historical videos and the evidence & proofs being unearthed for the world to see and for we, the Jewish people, to realize how close we are to the Geulah Shleimah. We do not need their evidence, etc., because we as G-D fearing Yehudim 'know', but this is for the rest of the world to 'know'.
Yasher Koach!