Wednesday at 7 PM Israel time will be episode #21 of our Root and Branch Medical War Crimes series.  This one will have some very important information.  Our guests will be Uriel ben-Mordechai and Rita Price.

Uriel is a maven on fighting the mask mandates in the USA and Israel, and is currently involved in a Supreme Court case against airlines in the United States.

Rita is an Israeli lawyer who has fought numerous lawsuits against mask enforcement and other such human rights abuses against Israeli citizens.

They will discuss these cases and provide practical information that everyone needs to be armed with.  Our plan is for Rita to deliver many of her remarks in Hebrew and for us to summarize them in English so that the information will be accessible to both English and Hebrew speakers. Share this widely, and don't miss it!

The link to register for the live program is https://us02web.zoom.us/meeting/register/tZUld-6upj4tGdYQ6wzjPJDWqwGGZ8jz36gJ and the recording will be available on my Rumble channel.

[me: I haven’t posted about the “W” situation because I find it a scourge of lashon hara by so-called respectable rabbis and others, which is exactly what we should AVOID if we want Mashiach and the Redemption!]

Most of Mishlei is devoted to contrasting various types of fools with those who pursue the Torah's wisdom. The following proverb is particularly insightful for our time:

A wise man contends with a foolish man; he rages and mocks, and there is no satisfaction. (29:9)

It is important to note that not all fools are created equal. The one mentioned here, the eh'vil, casts doubt on the most basic objective truths. He believes that his skepticism of the reality staring him in the face, and his clever ways of supporting alternate conclusions, is the highest form of intellectualism.

The eh'vil sees the sea splitting before the Jews, and the Egyptians drowning in the water at the same time Jews are crossing on dry land, and argues that this was a natural event. The Jews were in the right place at just the right time, and it happened to work out for them. Go ahead and “prove” him wrong.

The eh'vil sees people dropping dead in large numbers after being injected with something and argues that the injections had nothing to do with it. “Correlation doesn't equal causation!” he triumphantly declares. “Maybe they drank bleach. Ha ha. No evidence!”

This type of fool is the product of Amalek's indoctrination. Amalek is the numerical value of safek (doubt). The Hebrew word for eh'vil (אויל) has the same letters as the word ulay (אולי), which means “maybe”, for he always plays Devil's advocate – maybe this, maybe that. He thinks he is a philosophical and rhetorical genius, but according to the Torah he is a total fool. (For much more on this, see Amalek’s Last Stand.)

Back to our pasuk in Mishlei. Our commentators provide further insight into what happens when a wise man contends with such a person.

Rashi explains that the second half refers to the wise person as well. He reads it as follows: Whether the [wise man] shows him an angry face or a jovial face, he will find satisfaction with neither one. This is because the eh'vil is impervious to stern rebukes or pleasant overtures. Other types of fools may be interested in the truth, but this one has made a religion out of his “enlightened” skepticism. Neither friendly outreach nor reams of information will sway him, and the wise man who tries will only be frustrated.

Malbim reads the pasuk similarly and elaborates along these lines. He contrasts the eh'vil with two others types of fools, the kesil (כסיל) and the pesi (פתי). The kesil recognizes the ways of wisdom, but abandons them to satisfy his desires. He will rationalize his behavior, but deep down he knows the truth. A wise man will give an angry rebuke to such a person because he is a willful sinner. A stern approach may rattle such a person to repent and subjugate his desires in favor of what is right.

The pesi turns away from the laws of wisdom because he doesn't understand them. He is easily duped by false ideologies, and lacks discernment. The wise man will approach such a fool with friendliness and gradually teach him the ways of wisdom.

When it comes to the eh'vil, explains the Malbim, neither approach will work. If the wise man tries to rebuke this fool with reason and teach him the laws of wisdom, the eh'vil will not accept them, but will continue to cast doubts on them. If the wise man takes a more magnanimous approach, because the eh'vil is not a willful sinner, but stuck with his doubts, he still won't get anywhere. After all, there is no way to “scientifically prove” the laws of wisdom, so one who prefers to be plagued and spiritually paralyzed by doubts will always be able to rationalize it.

The wise man will therefore never find satisfaction in trying to teach the eh'vil. An advocate for the devil is unteachable.

Ralbag explains this pasuk differently. He reads it as I translated it above, in which the second half refers to the fool; the wise man contends with the fool, who reacts with anger or jeers. I believe this is the smoothest reading.

This really captures what we have experienced when trying to engage those whose minds have fallen to the insidious ideology of Amalek. They cut us off and do not allow us to complete a sentence, let alone a thought. Their reactions alternate between malicious anger and sanctimonious scorn.

For all their self-proclaimed allegiance to science, facts, data, and enlightened thinking, they are unwilling to allow anyone outside their box to even finish speaking, let alone consider the merit of their words. For all their presumed moral superiority, they demonstrate no control over their emotions. Their reactions are uniform – which is quite creepy – and entirely predictable.

Indeed, as much as they believe they are more wise and clever than those who preceded them, they are nothing but tired retreads of the classical fool. The Torah taught us all about them thousands of years ago. They will waste away with their foolish ideologies, like all their spiritual predecessors, while the timeless wisdom of the Torah will continue to illuminate the world.

If you received this from someone else and want to receive future articles directly, please send a request to endthemadness@gmail.com.

We have halachos for how to deal with rumors and accusations, and anyone who wishes to be considered a frum Jew must adhere to these halachos, period.

I will pay 5000 shekels to the first person who can show me where in the Chafetz Chaim or Shemiras Halashon it teaches the following:

1. We can — let alone must — conclude definitively that the accusations against Chaim Walder (all of which remain anonymous at this time) are true.

2. We should publicly condemn him in the most vicious of terms.

3. We should deprive his widow and orphans of parnassa.

I suspect that the vast majority of people who are doing these things have never learned Chafetz Chaim and Shemiras Halashon.  In light of that, they should probably exercise some caution before shooting from the hip.

I will also advise them that if they are wrong, they are jeopardizing their share in the world to come.  Is it a smart gamble?

According to actual halacha, we are only allowed to be suspicious about Walder. We are not allowed to draw ANY conclusions based on the information provided. Those who don't like the halacha are not morally superior or more compassionate. They are people who don't keep halacha.

I have a theory, and it's only a theory, that the mafia who run our country wanted Walder to leverage his status to push the shots on children.  He drew a red line there despite kowtowing to the agenda in the past, and the mafia eliminated him.  Or perhaps he ran afoul of them some other way.  What we are being told is just a cover story.

Again, this is only a theory, but it's no less credible than the story that dozens of anonymous claims were filed against him, the only person whose name was mentioned is conveniently dead without having left over any testimony, and no police reports were ever filed.  The supposed victims had the strength to talk to a leftist reporter and Eliyahu in a kangaroo court, but no one else.  I'm not saying Walder did these things or didn't do them -- I have no idea, and neither do you -- but this story doesn't pass the smell test.

I am emphasizing two points:

1. We should not rush to judgment.

2. We should not trust the media and the kangaroo court that trampled on halacha.

Anyone who says we must automatically draw conclusions based on anonymous accusations must agree to the following.  If someone makes anonymous accusations against them or someone close to them -- because they can't bear the pain of revealing themselves -- the self-righteous mob will accept the accusations as entirely true, no questions asked, and treat them exactly the same way.  And any potential accusers with an ax to grind or some other incentive know this in advance.  That's the deal.

Indeed, a former "Facebook friend" was going full blast against Walder.  I recalled that she had previously been the target of a smear campaign from competing shadchanim.  I responded to her post asking her if she learned anything from the experience, and how she felt when people jumped to conclusions.

She responded by blocking me. 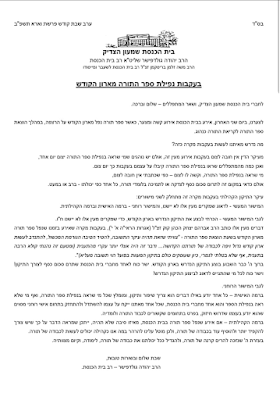 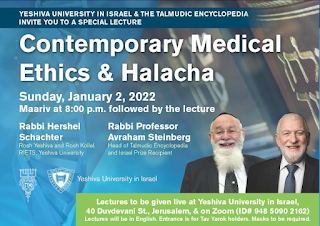 No, this is not a Purim joke.  Medical ethics and halacha, but you have to cover your face with a disgusting, harmful mask, and no dirty Jews allowed.

YU is a total disgrace to the Jewish people.

The Shimon Hatzadik shul in San Simon, Jerusalem sent out this letter to their members.  Last week a Sefer Torah fell out of the Aron onto the floor.  As the person who shared the letter with me related, this shul has been "extremely militant in their Covid policies", to the extent that they threw a small child out of the shul during Shemoneh Esrei.

I'm familiar with this shul, and this comes as no surprise.  In an area that is not known for warm and friendly shuls, this place has a particular reputation for being unfriendly, dating back many years.  A newcomer can languish there for months or years without receiving an invitation for a Shabbos meal.   You are more likely to be kicked out of your seat by a regular than greeted.

Now they had a Sefer Torah fall to the ground, and they remain oblivious.  They are enforcing tyrannical policies, driving good people out of their shul, and demanding people harm themselves before they enter.  No wonder the Sefer Torah wants out, too.