SHAVUOS – The Most Deeply Hidden

The Most Deeply Hidden
By Roy S. Neuberger

Why is Dovid Hamelech the eternal king of Israel?

There was never anyone else like him. He is Kodesh Hakadoshim, Holy of Holies. He tried to remain hidden just as the Ribono shel Olam is hidden. His descendant, Moshiach ben Dovid, is extremely hidden. It seems quite likely that Moshiach ben Dovid is in the world today, but we do not yet know who he is. I am sure that, when he is revealed – may it be very soon, in our days! –it will be as it was when Yosef revealed himself to his brothers.

“Now Yosef could not restrain himself in the presence of all who stood before him, se he called out, ‘Remove everyone from before me!’ Thus no one remained with him when Yosef made himself known to his brothers. He cried in a loud voice. Egypt heard, and Paro’s household heard. And Yosef said to his brothers, ‘I am Yosef. Is my father still alive?’ But his brothers could not answer him because they were left disconcerted before him.” (Beraishis 45:1-3)

Compare this please to the following description: “The House of Yishai had already despaired of having G-d’s glory revealed within it because of the ‘shame’ caused by Dovid. It was G-d’s will to conceal His plan from His loved ones until the appropriate time arrived. And now Shmuel (Hanovi) had come with a horn of anointing oil … to anoint a king from the house of Yishai. Yishai brought all his seven sons forward so that G-d might indicate which one of them was most fit in His eyes. However, Yishai did not call Dovid ….

“‘Are there no more youths?’ [asked Shmuel] … And [Yishai] replied: ‘there is a little one remaining and he is tending the flocks’…. Shmuel replied: ‘Send for him and bring him.’…
They sent and brought him. He was redheaded, with beautiful eyes and pleasant appearance…. And G-d said, ‘Rise! Anoint him, for he is the one. And he anointed him in the midst of his brothers.” (Book of Our Heritage, Rabbi Eliahu Kitov, p. 855ff)

In the world of Esav, everything is “me first.” People push in front. Drivers cut you off. Businessmen try to destroy their competitors. People want their face on the cover of the magazine. Politicians employ polling agencies so they can tailor their policies to what the public wants. Fashions are designed to attract the eye to what should not be seen. People dress to shock, so that others will look at them. The evil eye is everywhere, desiring that which belongs to others. There is no truth. There is no integrity. There is no dignity.

And we, Am Yisroel, have contracted this deadly disease!

What is the ideal? We are supposed to imitate the ways of the Ribono shel Olam and He is the Most Hidden! Moshiach, the son of Dovid Hamelech, who will save the world, is deeply hidden. No one knows where he is. Jaws will drop when he is revealed, just as jaws dropped in Mitzraim. “The stone the builders despised has become the cornerstone.” (Tehillim 118)

“Dovid … tended his father’s sheep. In a short time he became king, and everyone said, ‘He was just a shepherd and now he is a king!” He replied, ‘You are surprised about me? I am even more surprised than you!” (Midrash Shocher Tov 118:21)

My friends, we desperately need to understand this. We need to prepare for Moshiach by imitating Dovid, who imitated the ways of the Ribono shel Olam. We need to eliminate from ourselves the traits of the fatally sick world which surrounds us. Dovid Hamelech was small in his own eyes. When we are small in our own eyes then we will understand that our only hope is to cling to the Ribono shel Olam in order to establish an identity and an eternity. “Dovid’s eyes were always lowered out of fear of his Master. When he walked among the people, there was no haughtiness in him.” (Zohar 2:101b)

As we approach Har Sinai to receive the Holy Torah, we need to discard the traits that are clinging to us from two thousand years of living amidst those who desire to destroy sanctity in the world. “Even after the merit of the Avos is used up, we count upon being redeemed in the merit of [Hashem’s love for us] … The Geulah that will take place at the end of days will be for the sake of Hashem’s Name with love. This is what the Gemara means by saying, ‘In the period preceding the coming of Moshiach … upon what can we rely? Only upon our Father in Heaven!’ (Sotah 49a, as cited by Rabbi Yechezkel Levenstein zt”l, Legacy of the Mashgiach, p. 270)

In the merit of our complete reliance on the Ribono shel Olam, may we accept the Torah completely and soon see the Geulah Shelemah and the anointing of Moshiach the Son of Dovid! 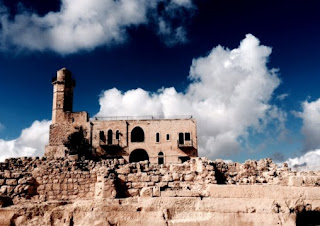 The Kever of Shmuel Hanovi, the Prophet who anointed Dovid Hamelech.