King Eisav and King Yishmael and the Ishmaelites

What Trump will learn during his short visit to Israel is that one of the main challenges to making peace is getting Israelis to believe that their security is taken into account.

Israelis are disenchanted with the prospects of new withdrawals. This trip – so early in his presidency – seems designed to give Israelis the feeling that Trump has their back. The appointment of David Friedman, a staunch pro-Israel activist, as the US ambassador to Israel, as well as Trump’s son-in-law, Jared Kushner, as the main envoy to the region, are additional examples [and Jason Greenblatt]. JPost


[ed. this is a good show of intention, but will the beauracrats (Deep State) allow it? see below]


ICONOCLAST IN THE PROMISED LAND

It was because of his foreign policy iconoclasm that Israelis were, by and large, euphoric when Trump was finally inaugurated in January. […] Trump’s decision to make the case outright to the Muslim leaders was all the more astounding because on the eve of his speech, McMaster demeaned his refusal to embrace the narrative that Islam is peace in an interview with ABC News. In McMaster’s insubordinate words, “The president will call [Islamic terrorism] whatever he wants to call it. But I think it’s important that whatever we call it, we recognize that these are not religious people and, in fact, these enemies of all civilizations, what they want to do is to cloak their criminal behavior under this false idea of some kind of religious war.” […] McMaster then insisted that despite the fact that his boss continues to talk about “radical Islamic terrorism,” Trump is coming around to embracing the official narrative that Islam is unrelated to Islamic terrorism. “This is learning,” he said.

[ed. McMaster has to go]

But while Trump has maintained his fact-based rhetoric on Iran, for instance, his actual policy is very similar to Obama’s. Rather than keep his campaign pledge and cancel the nuclear deal which guarantees Iran a nuclear arsenal in ten years, Trump chose to punt. He certified – wrongly – that Iran is abiding by the terms of the deal even as the Iranians are stockpiling uranium in excess of the amounts permitted under the deal and are barring weapons inspectors from entering their nuclear sites. So too, Trump has kept up Obama’s practice of keeping the public in the dark regarding what was actually agreed to with Iran by refusing to reveal the nuclear agreement’s secret protocols.[…] even when Trump has adopted a position that repudiates the establishment’s line, the fact is that the establishment’s members dominate his foreign policy team. And as a consequence, they do everything they can to dilute the significance of his moves.
Caroline Glick JPost

The King Meets the Ballista 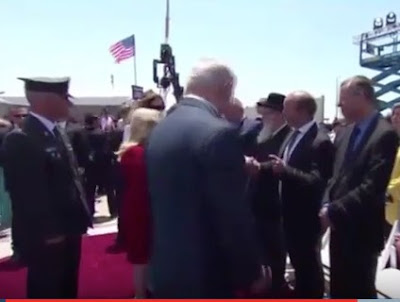