BENNETT vs NETANYAHU vs ERETZ YISRAEL – Yitzchak and Yishmael

A Slow Relinquishing of the Land of Eretz Yisrael to Yismael
“There is no hope for an end to this conflict; it goes all the way back to Abraham, Isaac and Ishmael.”

"On that day, God made a covenant with Abram, saying: “To your descendants I have given this land, from the river of Egypt as far as the great river the Euphrates. The land of the Kenites, Kenizites, Kadmonites; the Chitties, Perizites, Refaim; the Emorites, Canaanites, Gigashites and Yevusites.” (Genesis 15:18-21)

“And I will give to you and to your descendants after you, the land of your temporary residence, all the land of Canaan as an eternal possession and I will be a God to them.” (Genesis 17:8)

“Your wife Sarah will bear you a son, and you will name him Isaac. I will establish My covenant with him as an eternal covenant to his descendants after him. And as for Ishmael ... I have bless him and I will make him fruitful and will increase him exceedingly. He will become the father of twelve princes and I will make him into a great nation. But I will establish My covenant with Isaac who Sarah will bear to you at this time next year.” (Genesis 17:19-21)


*So Isaac is the person who will carry on the mission of Abraham, the mission of the Jews. A rivalry will exist between Sarah and Hagar and their children, Isaac and Ishmael. Because of this rivalry Hagar and Ishmael will be sent away. (Jewish tradition notes that after Sarah’s death, Abraham takes Hagar back as wife and he fathers more children through her.(2) ) **This rivalry will carry on for generations is viewed as the metaphysical root of the modern rivalry between the descendants of Isaac (the Jews) and Ishmael (the Arabs)

"Israeli Prime Minister Binyamin Netanyahu (…) will present the Diplomatic-Security Cabinet with a proposed package of incentives for PA Arabs, created in honor of US President Donald Trump's upcoming visit. The Cabinet will vote, among other things, on a proposal to allow Arabs to build in Israeli-controlled Area C, relaxing restrictions on Arabs wishing to pass from Jordan to Israel through the Allenby Border Crossing, and building industrial areas in Hevron-area Tarqumiyah and the northern Samaria Arab town of Al-Jalama.

"Jewish Home ministers, including Justice Minister Ayelet Shaked and Education Minister Naftali Bennett, will vote against allowing Arabs to build in Area C, since it automatically changes the borders of the three areas." ArutzSheva

Yes to financial incentives, no to diplomatic concessions

"We're talking about massive construction in Area C, which would bring hundreds of thousands of Arabs into the area and blur the border. It would annex Area C as part of the massive Arab illegal building - and do exactly what former PA leader Salam Fayyad wanted.”

"It is extremely twisted that Netanyahu will not allow any Jewish building in Area C. The Planning Committee's meeting has been pushed off several times, resulting in an effective freeze of Jewish building in Judea, Samaria, and Jerusalem.” ArutzSheva 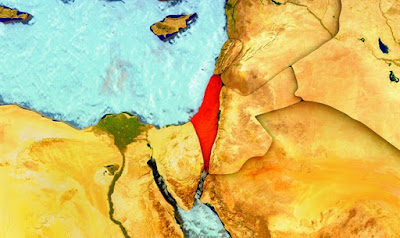 (tiny Israel among the Arab Nations)

The White House on Friday released a video detailing President Donald Trump’s upcoming trip to the Middle East, but which omitted the Golan Heights, Judea and Samaria from the map of Israel that appeared in the video.

The video was removed from the internet hours later without explanation, but not before several media outlets picked up on it and reported about it.


–––––––––––––––––––––––––––––
**Muslim tradition, as portrayed in the Koran, re-inserts Ishmael back into the lineage of Abraham where he is usually mentioned before Isaac. (see Koran Sura II, verses 110-140.). It’s also interesting to note that Moslems celebrate a holiday called Id al Adchah-The Feast of the Sacrifice, which commemorates Abraham’s attempt to sacrifice Ishmael. (Note the Muslims altered the binding of Isaac story, Gen 22, and replace Isaac with Ishmael.) *SimpletoRemember