PURIM – The Oral Torah – and Redemption


ON PURIM WE ACHIEVED UNITY BY OBEYING THE COMMANDS OF ESTHER AND MORDECHAI, BY REASSERTING THAT THE ORAL TORAH WAS EVERY BIT AS BINDING AS THE WRITTEN TORAH.
AS THE WRITTEN TORAH PROVIDED UNITY AT SINAI, SO THE ORAL TORAH PROVIDED UNITY AT PURIM.
[I find this very interesting that the Jews had their doubts about the Oral Torah (such as many do today) It is amazing that we are still struggling with those who doubt the Oral Torah.  I wonder if they observe Purim, because if they did, they should see their folly. See footnote below About the Oral Law]

[WIKIPEDIA] The primary source relating to the origin of Purim is the Book of Esther, which became the last of the 24 books of the Hebrew Bible to be canonized by the Sages of the Great Assembly. It is dated to the fourth century BCE[34] and according to the Talmud was a redaction by the Great Assembly of an original text by Mordechai.[35]

The Tractate Megillah in the Mishnah (redacted c. 200 CE) records the laws relating to Purim. The accompanying Tosefta (redacted in the same period) and Gemara (in the Jerusalem and Babylonian Talmud redacted c. 400 CE and c. 600 CE respectively)[36] record additional contextual details such as Queen Vashti having been the daughter of Belshazzar as well as details that accord with Josephus' such as Esther having been of royal descent. Brief mention of Esther is made in Tractate Chullin (Bavli Chullin 139b) and idolatry relating to worship of Haman is discussed in Tractate Sanhedrin (Sanhedrin 61b).

The work Esther Rabbah is a Midrashic text divided in two parts. The first part dated to c. 500 CE provides an exegetical commentary on the first two chapters of the Hebrew Book of Esther and provided source material for the Targum Sheni. The second part may have been redacted as late as the eleventh century CE and contains commentary on the remaining chapters of Esther. It too contains the additional contextual material found in the Josippon (a chronicle of **Jewish history from Adam to the age of Titus believed to have been written by Josippon or Joseph ben Gorion).[37]

In a remarkably short period of time, the mighty empire of Babylon was toppled and taken over by invading hordes of Persians and Medes. All that had been Babylonian now became absorbed into the Persian Empire, which at its height included 127 countries stretching from Afghanistan and India in the east to southern Ethiopia and the sub-Sahara continent in the west.

When the Persians and Medes took over there were a number of immediate revolutions among the generals themselves until Ahasuerus reached office. The new rulers needed intelligent, capable and industrious officials to help stabilize and run their empire. They found many such candidates among the Jewish people.

The Book of Esther begins with an unbelievably lavish 180-day banquet thrown by the Persian king Ahasuerus. To the casual reader, it is difficult to understand the connection between the banquet and the rest of the Book of Esther. Many years passed from the time of the banquet to the events that led to the decree of extermination by the Persian authorities. Even most Jews of the time did not see the connection. However, from the biblical perspective the banquet was the spiritual cause of the terrifying events that were to follow.

To emphasize this point, at the climax of the 180-day celebration Ahasuerus took out the utensils of the Temple (that he had inherited from the Babylonians who had sacked Jerusalem) and displayed them, the Talmud says (Megillah 12a). He even put on the garments that belonged exclusively to the High Priest (ibid.). The Jews in attendance must have stood there aghast. But it was too late. Their presence gave credence to the king’s act.

What an enormous for desecration just for Jews to walk in there.


What Occurred Next:
The Events of the PURIM Haggadah Delivering the Jews to . . .

Shabbath 88a: And they stood under the mount R. Abdimi b. Hama b. Hasa said: This teaches that the Holy One, blessed be He, overturned the mountain upon them like an [inverted] cask, and said to them,'If ye accept the Torah, 'tis well; if not, there shall be your burial.' R. Aha b. Jacob observed: This furnishes a strong protest against the Torah: Said Raba, Yet even so, they re-accepted it in the days of Ahasuerus, for it is written, [the Jews] confirmed, and took upon them [etc.]:  [i.e.,] they confirmed what they had accepted long before. Hezekiah said: What is meant by, Thou didst cause sentence to be heard from Heaven; The earth feared, and was tranquil: if it feared, why was it tranquil, and if it was tranquil, why did it fear? But at first it feared, yet subsequently it was tranquil, And why did it fear? — Even in accordance with Resh Lakish. For Resh Lakish said: Why is it written, And there was evening and there was morning, the sixth day; What is the purpose of the additional 'the'? This teaches that the Holy One, blessed be He, stipulated with the Works of Creation and said thereto. 'If Israel accepts the Torah, ye shall exist; but if not, I will turn you back into emptiness and formlessness.'

Footnote:  About the Oral Law:

The earliest name for the oral teachings was "miẓwat zeḳenim" (Suk. 46a). In the New Testament it is called παραδόσεις τῶν πρεσβυτέρων, and by Josephus and Philo παράδοσις ἄγραφος τῶν πατέρων διαδοχή. After the destruction of the Temple the term Mishnah, the δευτέρωσις of the Church Fathers, was employed instead; the phrase "Torah shebe-'al peh" (see Sifre 112c [ed. Weiss]; Sifre, Deut. xxxvii. 10, 145a [ed. Friedmann]) is found already in the time of the Tannaim, and is also ascribed to Shammai and Hillel (Shab. 31a), the words "shebe-'al peh" in this passage being a later addition made to explain the expression "shete torot" (two laws). Shammai and Hillel were the first to speak of the written and the oral law as equally authoritative (ib.). This is illustrated by the episode between Hillel and the Bene Bathyra (Yer. Pes. vi. 33a), who would not at first admit Hillel's arguments that it was permitted to desecrate the Sabbath by the Passover sacrifice, although they submitted as soon as he said: "Kak shama'ti" (= "It has been transmitted to me"). This story, as well as the phrase "im ḳabbalah neḳabbel" (= "if it is a tradition, we must accept it"), which occurs frequently in the halakic midrashim, shows that even though no explicit reference to such law outside of and in addition to the Pentateuch is found anywhere in the prophetic or the hagiographic books of the Old Testament, the belief in the existence of an oral law was widely accepted, and was not rejected by any scholar. This belief is also mentioned in Sifre, Deut. 4 (ed. Friedmann, 66b), and by R. Akiba in Men. 29b, while, according to the generally accepted explanation, the Mishnah Abot i. 1 indicates the successive traditioners of the oral law. JewishEncyclopedia

**Flavius Josephus, the Antiquities of the Jews

The Me'am Lo'ez commentary on the Bible was originally written in the Ladino language in Constantinople by Rabbi Yaakov Culi, one of the greatest Sephardic sages. The first books were first published in 1730. It is a monumental classical which weaves Midrash, halachah and aggadah from the Talmud with the best of the later commentaries to produce an exceedingly thorough, yet immensely readable, work. Below is Chronology of the Exile from Meam Loez: 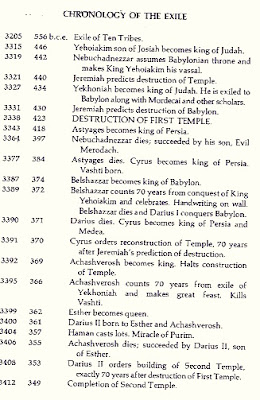 Angela, no I am not a non-Jew, I am an Orthodox Jews Woman. The mention was part of an explanation. What makes you think otherwise?