UPDATE - "There is NO Muslim Ban"

UPDATE
"At a news conference Tuesday, Department of Homeland Security Secretary emphasized that Trump's executive order on immigration "is not - I repeat - not a ban on Muslims."


He also noted: "I would be less than honest if I told you that some of those countries that are currently on the list may not be taken off the list anytime soon."

THERE IS NO "MUSLIM BAN"
The countries named in the temporary travel halt were actually
listed by the
Obama administration.


Because of the insanely dishonest media, we now have physically violent mobs rampaging through U.S. airports, punching people in the face. Welcome to the "mob-ocracy" of America, where insanity rules over reason.

"This may come as a shock to anyone stupid enough to still believe the lying left-wing media, but there is no Muslim ban in America. President Trump‘s executive orders, signed last Friday, are only a temporary halting of immigrants and refugees from seven countries with strong ties to international terrorism.

None of those seven countries are among the list of nations from where the largest number of Muslims immigrate to America.

"The seven countries were chosen and named by Obama administration officials! (They were chosen by Obama, not by Trump.) Both Obama and former President Jimmy Carter invoked temporary bans on travelers from terror-linked countries, by the way.

"Yet the wholly dishonest, anti-America left-wing media has no interest in reporting the truth about any of this. They’re using the executive order to whip up mass hysteria as an emotional weapon against President Trump.

"What we’re all really witnessing yet again is the complete collapse of the credibility of the left-wing media and its mindless zombie followers. They are all truly unhinged, mentally ill “emotional zombies” who are instantly manipulated into faux outrage on any event the media seeks to contort into hatred directed at Donald Trump.

See also:  Goodbye, Obama, You “Sleeper Cell” Traitor And Enemy Of America… (You Won’t Be Missed). Leaving the White House is “sleeper cell” Barack Hussein Obama, an enemy of liberty, a serial liar and someone who meticulously followed a Soviet-style plan of subversion to systematically destroy America. Read the whole staggering list and more about How Obama aided and abetted America’s enemies over the last eight years

AND THIS,  from a letter writer to the JPost:
"Israelis are not permitted to enter 15 countries, including Iran, Iraq, Pakistan and Yemen. Can someone show me where all the demonstrations are concerning this discriminatory policy? When its Jews who are locked out, it seems that nobody, including the Left’s humanitarians, cares.”

Obama Routinely Bombed 5 out of the 7 Countries


. . .Trump just banned, but the media said nothing: Total hypocrisy. Out of the seven countries that were banned by President Trump last Friday, five were bombed by the Obama administration: Syria, Iraq, Yemen, Libya and Somalia. It’s fine for the Nobel Peace Prize winning President to bomb these people in their own countries, but for President Trump to temporarily prevent them from traveling to our country to keep America safe is “un-American” and “unconstitutional.” 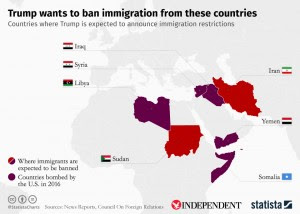 *The Leftist Socialists in Israel and the leftists worldwide use the same mo·dus op·e·ran·di [– a Latin phrase, approximately translated as "method of operation”] of lies, i.e. –

1. Bluff: a statement intended to deceive or confuse
2. Canard: an unsubstantiated story or report
3. Deceit: a deceptive statement
4. Deception: A statement or action intended to mislead
5. Distortion: a deviation from the true meaning, or an overstatement of proportion
7. Exaggeration: an overstatement or overemphasis
8. Fable: a fictitious statement or story, in the sense of something made up to explain or justify an unmerited action or state of affairs
9. Fabrication: a made-up fact or incident
and the list goes on ...
Posted by Neshama at 10:55 PM