Fascinating [UPDATE] Video About THE RING OF FIRE

KEEP IN MIND:
"a geological event including a physical split of land masses may have occurred during the generation of Peleg and that this defines the term niflega. [Source: Niflega from *TomerDevorah–see text below] Also maps at end of article.
And from BERESHIS (Genesis):
לב אֵלֶּה מִשְׁפְּחֹת בְּנֵי-נֹחַ לְתוֹלְדֹתָם, בְּגוֹיֵהֶם; וּמֵאֵלֶּה נִפְרְדוּ הַגּוֹיִם, בָּאָרֶץ--אַחַר הַמַּבּוּל. {פ} 32 These are the families of the sons of Noah, after their generations, in their nations; and of these were the nations divided in the earth after the flood.


And now to the Video:
The Reason of all Earthquake and volcano Around the World


The Ring of Fire is a string of volcanoes and sites of seismic activity, or earthquakes, around the edges of the Pacific Ocean. Roughly 90% of all earthquakes occur along the Ring of Fire, and the ring is dotted with 75% of all active volcanoes on Earth.

The Ring of Fire isn’t quite a circular ring. It is shaped more like a 40,000-kilometer (25,000-mile) horseshoe. A string of 452 volcanoes stretches from the southern tip of South America, up along the coast of North America, across the Bering Strait, down through Japan, and into New Zealand. Several active and dormant volcanoes in Antarctica, however, “close” the ring.

The Ring of Fire is the result of plate tectonics. Tectonic plates are huge slabs of the Earth’s crust, which fit together like pieces of a puzzle. The plates are not fixed but are constantly moving atop a layer of solid and molten rock called the mantle. Sometimes these plates collide, move apart, or slide next to each other. Most tectonic activity in the Ring of Fire occurs in these geologically active zones.

A convergent plate boundary is formed by tectonic plates crashing into each other. Convergent boundaries are often subduction zones, where the heavier plate slips under the lighter plate, creating a deep trench. This subduction changes the dense mantle material into buoyant magma, which rises through the crust to the Earth’s surface. Over millions of years, the rising magma creates a series of active volcanoes known as a volcanic arc.

If you were to drain the water out of the Pacific Ocean, you would see a series of deep ocean trenches that run parallel to corresponding volcanic arcs along the Ring of Fire. These arcs create both islands and continental mountain ranges.

The Andes Mountains of South America run parallel to the Peru-Chile Trench, created as the Nazca Plate subducts beneath the South American Plate. The Andes Mountains include the world’s highest active volcano, Nevados Ojos del Salado, which rises to 6,879 meters (over 22,500 feet) along the Chile-Argentina border. Many volcanoes in Antarctica are so geologically linked to the South American part of the Ring of Fire that some geologists refer to the region as the “Antarctandes.”

A divergent boundary is formed by tectonic plates pulling apart from each other. Divergent boundaries are the site of seafloor spreading and rift valleys. Seafloor spreading is the process of magma welling up in the rift as the old crust pulls itself in opposite directions. Cold seawater cools the magma, creating new crust. The upward movement and eventual cooling of this magma has created high ridges on the ocean floor over millions of years.

A transform boundary is formed as tectonic plates slide horizontally past each other. Parts of these plates get stuck at the places where they touch. Stress builds in those areas as the rest of the plates continue to move. This stress causes the rock to break or slip, suddenly lurching the plates forward and causing earthquakes. These areas of breakage or slippage are called faults. The majority of Earth’s faults can be found along transform boundaries in the Ring of Fire.

The San Andreas Fault, stretching along the central west coast of North America, is one of the most active faults on the Ring of Fire. It lies on the transform boundary between the North American Plate, which is moving south, and the Pacific Plate, which is moving north. Measuring about 1,287 kilometers (800 miles) long and 16 kilometers (10 miles) deep, the fault cuts through the western part of the U.S. state of California. Movement along the fault caused the 1906 San Francisco earthquake, which destroyed nearly 500 city blocks. The earthquake and accompanying fires killed roughly 3,000 people and left half of the city’s residents homeless.

Maps of the estimated lands before the Flood: Pangaea (Wikipedia) 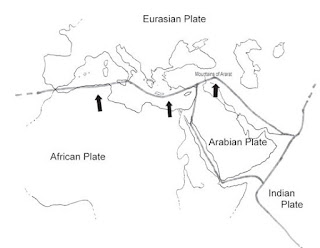 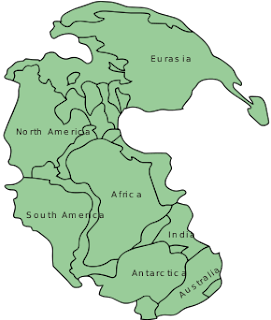 *CLASSIC JEWISH SOURCES FOR NIFLEGA AS A PHYSICAL EVENT
To begin with, when referring to nations (people), the Torah normally uses the term nifredu [branched out] (Gen. 10:5) or vayifatz [scattered] (11:8). But there is evidence in traditional Jewish sources that the term niflega refers to a geological phenomenon. Rashi, in his commentary on the Talmud (Shabbat 10b, d"h she'yeshivata), specifically indicates nitpalgu ha'aratzot [the land masses were split]. The Torah Temimah quoting the Seder Olam also uses the terminology nitpalgu ha'aratzot, as does the Rekanati on Deuteronomy 32:5. Indeed, both Targum Onkelos and Ibn Ezra translate niflega as "hatzi [divided in half']." Seforno indicates that the life span of people during Peleg's generation was halved as a result of a "change of air"; that is, something physical. Similarly, Rashi, in his commentary on I Chronicles 1:19, explains niflega as the life-span being halved, and Derashot R. Ibn Shuaib (Parashat Toldot Noah) explains niflega as "shenitpazru bshinui avir [they were dispersed by a change of air]."

...CONCLUSION
There is ample evidence from classic Jewish sources, dating hundreds and even thousands of years before modern science conceived of catastrophic plate tectonics, that a geological event including a physical split of land masses may have occurred during the generation of Peleg and that this defines the term niflega.

"G-d said, 'Let the water gather together under the heavens to one place and let the dry landmass appear and so it was' (Bereishis 1:9). The Zohar says, 'The water brought forth one dry landmass and it became seven landmasses" (Chadash 12:1)
- We Are Not Alone by Adi Cohen, page 245

Yes, I see they, YouTube, has stopped it from being viewed. I wonder why :-( ?

Anon, that is a beautiful quote, and explains a lot.
Is that your book? Or, just one you read?

Anon, i rechecked the video source and it’s still there. I reposted the video. Try it now.

Wow. I heard about the breaking away of the one continent into many but never saw a map of where they fitted together before. My daughter was the one who dreamed about Moshiach's times. In her most recent dream, she told me America would be moved right up against Israel and this actually makes sense when you see the map.