Mattis was approved by a vote of 98-1. Sen. Kirsten Gillibrand, D-N.Y., was the lone vote against. Kelly was approved 88-11. Sen. Jeff Sessions, R-Ala., did not vote on either Kelly or Mattis. Sessions has been nominated to be Attorney General.


Gen. Mattis is known as an intellectual in the military ranks, and was once called a “warrior monk.” He reportedly has a library of 7,000 volumes, is fond of reading diplomatic cables, and has carried with him on all his deployments a
VOLUME OF MEDITATIONS BY ROMAN EMPEROR MARCUS AURELIUS 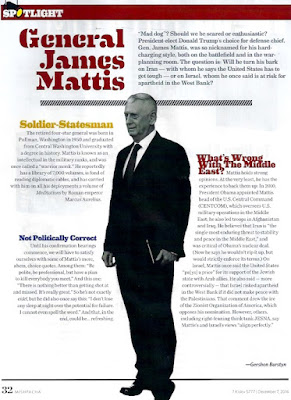 The legend of Antoninus (Marcus Aurelius) begins with his earliest youth. The mother of Rebbi exchanged her son soon after his birth for Antoninus—the child of an intimate acquaintance. In this way she and her child managed to escape the officers of Hadrian, who were persecuting the woman because she had her son circumcised. As a consequence Antoninus imbibed with his milk a love for Jews and Judaism (Tos. 'Ab. Zarah, 10b); and it was Rebbi, the son of this vicarious mother, who served as the guide and friend of Antoninus; succeeding finally in getting him to embrace Judaism (Yer. Meg. i. 72b; B. H. vi. 130, 131).

He is called "the father of "(Severus) by the Babylonian Talmud, but which Roman emperor is actually meant by this name can hardly be determined. He has in turn been identified with Marcus Aurelius (Rapoport and Bodek), Septimius Severus (Graetz, who identifies Rebbi with Judah ha-Nasi.)

[…] In like manner Antoninus could not see why the Jewish law appointed certain hours for prayer, since the latter should be offered at any time that the impulse to devotion was felt (Tan. ed. Buber i. 196); Rabbi accordingly showed him by an apt illustration. But sometimes, on the other hand, it was Antoninus who instructed Rabbi, making, for instance, the statement that while the unborn child receives its vital principle at conception, the germ of mentality and its concomitant, evil inclination, are received at birth only (Sanh. l.c.).

ANTONINUS IN THE TALMUD, By: Louis Ginzberg

The father, the previous emperor Antoninus Pius was known as a man of exceptional kindliness […] His adopted son (and son-in-law) is still famed for his philosophic work, “Meditations of Marcus Aurelius”. “He exceedingly loved to engage in the study of wisdom (Dio Cassius 71,1) and it is certain that he read the Greek version of the scriptures and was inspired. Rabbi Judah the Nasi (“Rebbi”) probably met him at Rome.

Marcus Aurelius resided for a time in the Land of Israel at Caesaria, when Rebbi was at Zippori (where he spent the last 17 years of his life, e except for a short time before his death when he resided at Beth Shearim), and a most unusual episode in history transpired at that time.

The Roman emperor became the devoted disciple of the Nasi. By means of one of the underground tunnels (which abounded in the Land of Israel and which were famous in the war of Betar), Antoninus visited his teacher frequently and sought his counsel not only in matters of mind and soul, but also in the affairs of government. The relationship between these two was a perilous secret which was never divulged to anyone (except Rebbi’s closest disciples) during the lifetime of the two participants.

Now was fulfilled the *true function of Esav as foretold: “The elder shall serve the younger” (Bereshis 25:23). Had Esav been subservient to his greater younger brother, the history of Mankind would have been very different. Here, something of the kind took place. The ruler of the mightiest nation of the gentiles became a loyal disciple of the greatest Jew of the time, and thereby was accomplished an achievement of the very greatest magnitude: the Closing of the Mishnah.

Source: Exalted People [History of Am Yisroel from Destruction of Second Temple down to the Sealing of the Talmud], by Rabbi Avigdor Miller zt”l (5744)


The earlier legend sees in Antoninus only the Godfearing non-Jew, so well inclined toward Judaism that he erected an altar to the Jewish God, without actually becoming a Jew (Yer. Meg. i. 72b; thus also probably Midr. Teh. xxii. 24). The later legend, however, regards him as the type of the true proselyte, , and it is affirmed that at the resurrection he will arise and be the leader of all proselytes (Yer. Meg. l.c., Lev. R. iii.). The cause of his conversion is said to have been his inquiry of Rabbi whether he would be entitled to partake of Leviathan in the future world. Rabbi assured him he would be considered worthy, but Antoninus would not believe him, because the law concerning the paschal lamb (Ex. xii. 48) states distinctly that no uncircumcised one shall partake of that.

He accordingly entered the covenant of Abraham and became a Jew (Yer. Meg. l.c.). This is also in the Talmud, Sanhedrin, Cheilik, Ch 11, page 91a, in a discussion of Antoninus and Rebbi; also in footnote (37) on same page.

Let us hope we see similar good relations between “warrior monk” General Mattis and the Jewish Nation, who stated:

“Every action we take will be designed to ensure our military is ready to fight today and in the future,” Mattis said. “Recognizing that no nation is secure without friends, we will work with the State Department, to strengthen our alliances. Further, we are devoted to gaining full value from every taxpayer dollar spent on defense, thereby earning the trust of Congress and the American people.” Matzav
Posted by Neshama at 8:44 AM