*The 'Gateway to America' opened 125 years ago,
January 1, 1892:
Ellis Island marks anniversary of the day it began to welcome 12 MILLION immigrants hoping to start a new life
It opened on January 1, 1892 and processed over 12 million immigrants starting a new life in the United States. Astonishing photos reveal the vast number of people who hoped to obtain their American visas. Home to the statue of liberty, Ellis island still greets about two million visitors a year
Men, women, and children are pictured, many with solemn faces after travelling thousands of miles in poor conditions and knowing that they could be turned away at the border.
These fascinating photos show the harsh reality that immigrants faced awaiting the screening process to enter the country in the early 20th century.
For 125 years the island has existed in the New York harbor, with the Statue of Liberty serving as a reminder of what was the country's main immigrant processing center until it closed in 1954.
Today the 27.5 acre island still greets about two million tourists a year, and received a $160 million renovation in 1990 to accommodate the visitors according to the Statue of Liberty-Ellis Island Foundation. 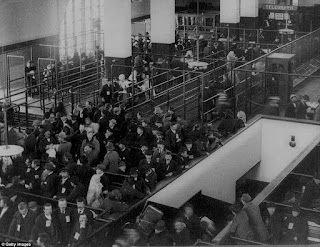 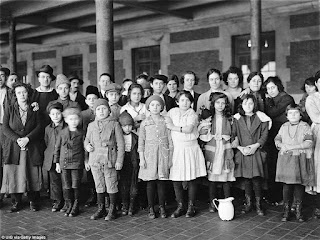 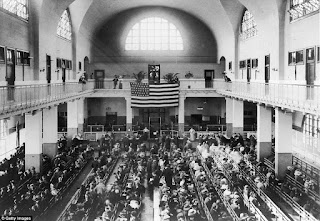 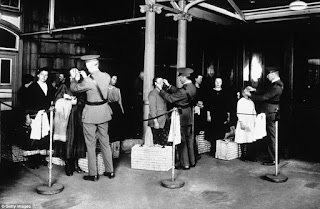 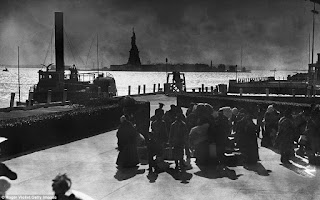 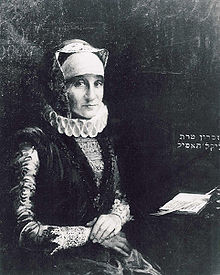 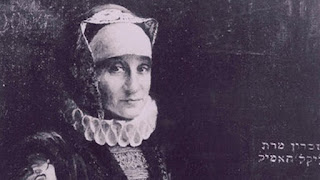 Identifying name* on portrait as Glückel of Hameln
A fancy portrait of Bertha Pappenheim in the persona of Glückel, wearing 17th century costume. The portrait is painted in a pastiche of the style of the period by Leopold Pilichowski. Pappenheim was a descendant of Glückel, who also translated the diaries into German. [Picture from Wikipedia] 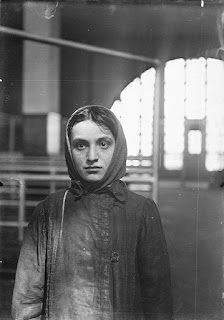 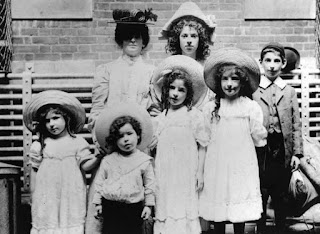 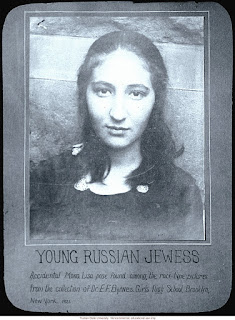 Source: From an article on Mail Online: Ellis Island 125 Years
Some Photos from Google search of “Jews at Ellis Island"

An interesting article about Jewish Names: In 1835, one of the anti-Semitic decrees of the Czar was that everyone had to take a last name. Jews never had last names. Today last names are the norm, but until 1835 in Russia, Jews did not have them. This decree by the Czar specifically was meant to identify and control the Jews.

Many Jews took more than one last name, because they did not want to be identified. For instance, there was a rule in the Russian army that it never took a boy who was an only child or only son. A Jew who had four sons gave each of his four sons a different last name. Each brother had an entirely different family name. That way each was an “only son.”

A last name meant nothing to the Jews. It could be changed like a piece of clothing. Many people never knew what their last name was. Jews went to great length to avoid registration, to avoid being identified.

Many of the Jewish names in the United States were given by immigration officers on Ellis Island. Some are humorous. The famous Rabbi Nesanel Quinn, zt”l, of Yeshiva Torah Vodaas was a Cohen and told that to the immigration officer, who wrote it down as “Quinn.” There are some more medical names that we cannot discuss which were given.

Last names never played a role in Jewish life, until Jews began changing them to sound less Jewish — when Horowitz became Harwood and Cohen became Cole and so on. For religious Jews it became a mark of honor to retain a name like Greenberg or Friedman.

The Czar also forbade Jews to marry before the age of 18. That was a blatant attempt to hinder the population explosion. Now, Jews never kept birth records. In Russia, no one celebrated birthdays or even knew when they were born. They only knew “approximately.”

The Czar made them sign a declaration that they were 18 years old, if they wanted to marry. Some never officially reached their 18th birthday because they never wanted to join the army. A person would sign one affidavit stating he was approximately 12 years old, and another stating he was approximately 20, so that he could get married. To do so he needed an extra name.

Certain Jewish communities would copy every name from the tombstones in the cemetery, and when the government came to town looking for people, they would tell the officials the person they wanted was dead. Then they would take them to the cemetery to prove it. In one town, everybody was dead. The next town over had tombstones without graves.

That attitude toward the government was the only way to survive. They were fighting laws meant to destroy them, laws that were immoral from the onset. They had no choice in the matter.
Posted by Neshama at 10:36 AM

Family names actually started somewhere in the 1500's (think Spain or Portugal). This was a good idea that came from the non-Jews and every family had to take a family name. Before then, for instance, a Jew would be called 'Moshe ben so and so, etc. Usually people took the names of their villages or towns or their trades or something they personally identified with.