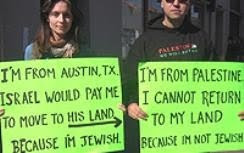 Arutz Sheva has a scary article,
and I wonder what Tamar Yonah will have to say about this:

Me: Now, the brazen marxist leftists are trying to steal and discredit the natural birthright of every Jew in the world, especially those in repressive dictatorial countries, whose only connection and ticket to freedom is their Jewish identity. These leftists have subversively switched truth with lie in a very open way.

“A small group of left-wing Americans, some of whom call themselves Zionists, have launched a “Breaking the Law of Return” campaign, branding as “racist” the Israeli law that guarantees citizenship to Jews. More than 1,000 American Jews have backed the movement….

[A] “...group of post-Zionist American Jews opposes even having the automatic right to become Israeli citizens by moving to Israel….

“The Law of Return creates an ethnically exclusive citizenship," Dr. Amy Kaplan, an English professor at the University of Pennsylvania and a co-founder of the 'Breaking the Law of Return' campaign, told The Media Line. "Anyone who can claim a Jewish grandparent has this automatic right to 'return' to this land while Palestinians who were dispossessed of that land, in 1948 and 1967 and most recently in East Jerusalem, can't have that same right. We see this as unjust and want to repudiate that right."

This is yet another siman (sign) that our time is running out in order to move to OUR HOMELAND Eretz Yisrael, Eretz HaKodesh.

So everyone who has been 'deliberating' and 'on the fence' about whether to leave the cushy lifestyle in America to return HOME, and welcome the newness, new language, and adjustments that are indicative of moving to a new society. But remember, it's a new society full of your cousins, uncles, aunts, grandchildren, and extended family. Arutz Sheva.

Tamar Yonah has much to say about her extended family still in the United States:

Of Enemies and Imbeciles

History Won't Wait For You -- Sell & Get Out Now

Don't Let History Pass You By and Show Me Your License, Homeowner!
(you might need to scroll down the page to find the article/mp3 Show files. On her Show files, there are usually two segments, the second one half way thru the file)
Posted by Neshama at 5:42 AM