The new research builds on a decade-old study of the Jewish priesthood that traced its patrilineal dynasty and seemed to substantiate the biblical story that Aaron, the first high priest (and brother of Moses), was one of a number of common male ancestors in the Cohanim lineage who lived some 3,200 years ago in the Near East.

The current study was conducted by Michael F. Hammer, a population geneticist in the Arizona Research Laboratory's Division of Biotechnology at the University of Arizona. Hammer's collaborators in the study include Karl Skorecki of the Technion-Israel Institute of Technology and Rambum Medical Center in Haifa and colleagues and collaborating scientists from Tel Aviv University and the Russian Academy of Sciences.

The July 2009 issue of Human Genetics has published the Hammer team's newest findings in their article entitled "Extended Y chromosome haplotypes resolve multiple and unique lineages of the Jewish priesthood."

Using the new data, Hammer and his team were able to pinpoint the geographic distribution of a genetically more resolved Cohen Modal Haplotype and tease apart a multiplicity of male lines that founded the priesthood in ancient Hebrew times. The more fully resolved Cohen Modal haplotype (called the extended Cohen Modal Haplotype) accounts for almost 30 percent of Cohanim Y chromosomes from both Ashkenazi and non-Ashkenazi Jewish communities, is virtually absent in non-Jews, and likely traces to a common male ancestor that lived some 3,200 years ago in the Near East.

Additional Y chromosome lineages that are distinct from that defined by the extended Cohen Modal Haplotype, but also shared among Cohanim from different Jewish communities, reveal that the priesthood was established by several unrelated male lines. Source
The J2 DNA Cohanim Migration 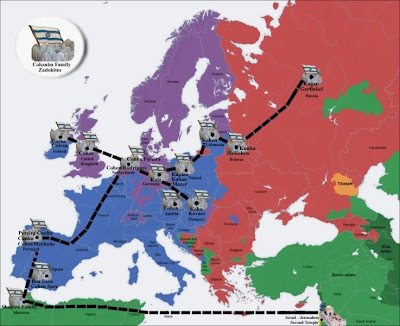 Dr. Karl Skorecki, the founder of CMH, reported during a Conference for Kohanim in Jerusalem 2007, that he and his research team have discovered not one but two Cohen Modal Haplotypes, which he called J1 and J2. “Pinchas the zealot mentioned in the Bible may be the origin of J2[25]” said Skorecki. According to the observed mutations rates, certain J2 haplotypes found on FTDN] database projects share a common ancestor who lived 3100+/-200 years bp, as Skorecki revealed to the public.
Below we can see the J2 Cohanim haplotype tree formed by 21 different traditional surnames related to Cohanim lineages in both Ashkenazi and Sephardi respective communities. This is how Joseph Felsenstein`s scientific genetic computer software placed them, considering their haplotypes. Only one different Cohanim surname was used in this case to represent the closest haplotype found in each family that can best stand for the exclusive cluster below formed by these 21 haplotypes.

Should anyone want to read further and explore this very interesting topic, this info came from Wikipedia.

It seems to me that "Pichas" was from Haplogroup J1 who came from the desert (Levite-Cohanim), but Zadok, on the other hand, was from the bloodline of "Malki-zedek" (the Jevusite) king of Shalem, who was also "a priest of El-Elyon"... I suspect that he got into the priesthood Job & family during the time of Solomon (who was the son of David and *Bat-Shuaa* the Jevusite), and he is the true ancestor of the J2 priests...

Remember that story about Malki-zedek? Remember how Abraham seems to know the true name of God "Yahwah", and identifies it with the Hittite version of 'El Eliyon Koneh Shamayim va-Arets' - which is the same God of Malki-zedek?

Remember how it contradicts the things that God said to Moses - that Abraham didn't know him by the name "Yahwah", only by the name "El Shaday"?

Think who had an interest to write such story about Abraham meeting the Jevusite king - who was a priest to El-Elyon long before the Israelites (and the Levite-priests) came along - and identifying "Yahwah" with the local "El -Elyon"... My guess is that this "Author J" was a representative of that Jevusite family of Zadok, and they both were Haplogroup J2...