Monster Blizzard on the Way!

Well, I should have said it's 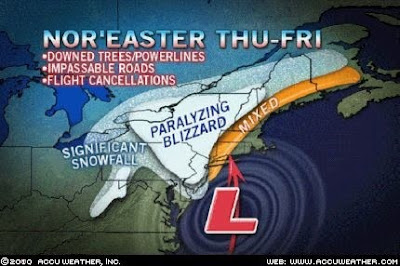 Later this week, a storm of colossal proportions will come up the Eastern Seaboard wrecking havoc from Pennsylvania to Maine. From northern and eastern Pennsylvania northward through New York and perhaps extreme western New England there is going to be a heavy, wind-driven snowfall beginning Thursday and lasting into Friday. Roads will close through this region, and there will be downed trees and power lines.

The storm's effects will extend into the higher elevations of southwestern Pennsylvania and where there is still a lot of snow on the ground from previous storms. Travel over those ridges will be next to impossible from Thursday afternoon through Friday.

The thing that stands out about this storm is the shear power it will have, and how much wind damage it can cause. From Maine to Virginia, winds will average 30 to 40 mph during the height of the storm with gusts to 60 and even 70 mph along the coastline. Accuweather

Did I read somewhere that Obama has scheduled a special gathering for Thursday (ahem! Taanis Esther)!