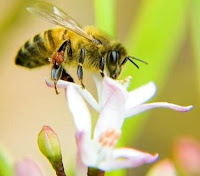 Robots & Bees to beat the Taliban

The homemade IED is the extremists’ deadliest weapon and America is spending billions on trying to combat it. We are granted access to this secret, smart and bizarre world (so reads the headline). “The opening eight minutes of the Oscar-nominated movie The Hurt Locker bring to light the terrifying work of bomb disposal units. The special effects may be Hollywood, but there is no exaggerating the horror of IEDs, the improvised explosive devices that are by far the biggest killers of British and American troops in Iraq and Afghanistan.”

[...]“The operational word in IED is ‘improvised’. As they are constantly changing, we need to keep vigilant and maintain our technological expertise to stay ahead of the game,” he says. The main focus of his work is finding chemical signatures of bombs. A ground-penetrating laser known as a Huskie has been developed to try to detect them through mass spectroscopy. The task now is to miniaturise it and enable it to work from a distance.

The irony of amassing all this money and brainpower to defeat a bunch of largely illiterate Afghan farmers assembling bombs in their mud houses using fertiliser packed in kitchen jugs is not lost on him. “Sometimes the simplest things are the hardest to defeat,” he says. “As Americans we like technology, we like complicated things. That’s what I’ve been trying to get my head round — how to think more simply.”

Eitan, Israel's new pilotless plane is our answer to the Persian Haman-Missile 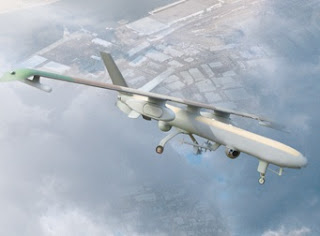 The plane can fly spying missions over Iranian territory, a roundtrip journey of almost 2,000 miles. Israel's Prime Minister Benjamin Netanyahu has made it clear he is determined the Islamic Republic will not acquire nuclear weapons he and other Israeli leaders insist the military option remains on the table.

Here is the ABC video of this magnificent flying machine!
Posted by Neshama at 12:45 AM