The Scent of Moshiach 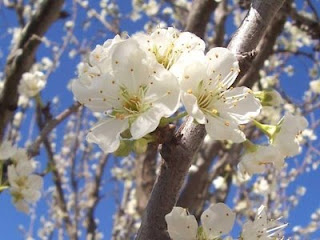 When I first saw this article I wondered why, at this particular time, was the tree finally bearing fruit. Fruit is the offspring of a fruit tree. Man is compared to a tree. Is there a common thread connecting these tzaddikim and was the fruit giving us a siman tov. After some searching (as I wanted to post as soon as possible) I was able to find the following. Please leave a comment and/or contribute.
I see the thread of Moshiach connecting these tzaddikim and the tree bearing fruit after so many years (the long golus) is the siman tov:

Plum Tree Growing Above Graves of 4 Tzadikim in Tiverya 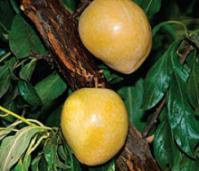 Tiveryans say that the tree was planted 270 years ago near the graves of 4 famous tzadikim: Rav Chaim Abulafia, who renewed the Jewish settlement in the city (d. 1744), Rav Menachem Mendel of Vitebsk, the primary disciple of the Maggid of Mezritch who was instrumental in spreading Chassidism throughout Belarus (d. 1788), Rav Yitzchak Smadja, and Rav Nachman of Ordinka, the grandfather of Rabbi Nachman of Breslav. From VosizNeias

The year 1740 brought good news to the Jewish settlement in Teveria. At that time, the Ottoman authorities invited the renowned kabbalist Rabbi Chaim Abulafia, the rabbi of Izmir, to come to Eretz Yisrael and rebuild Teveria, which had lain desolate for some time. The Ottoman authorities wanted the city rebuilt for economic reasons, but the Jews considered Abulafia’s mission a sign of the approaching fulfillment of their messianic hopes. Rabbi Haim Abulafia, re-established the yeshiva in Teveria, bringing new life to that city, which had been a vibrant center of Jewish life and creativity in the Second Temple and Talmudic periods.
In the year 1742 Rabbi Chaim Abulafia met with Rabbi Chaim ben Atar (the Ohr HaChaim) who just came to Israel. The Ohr HaChaim was a guest of Rabbi Abulafia for 9 days. Rabbi Abulafia Pleaded with him to remain in Teveria, R' Chaim ben Atar refused

This Chassidic leader and Kabbalist had reached the stage of self-mastery where no other influence either outer or inner was able to contain him from reaching that which his authentic self wanted to achieve. Thus his room was filled with the fragrance of Redemption, but the outside was not.

Rebbe Menachem Mendel of Vitebsk, a student of the Baal Shem Tov, explained why he left Tzfas and moved to nearby Tiberias. "The air in Tzfas is very pure and at night I could hear the angels calling out from heaven for the world to do Teshuva. It disturbed my sleep so much I had to leave."
Rebbe Schneur Zalman (about Rav Menachem Mendel): "I once saw him when he was giving audience and I realized that everything that the person seeking his council had done in his life was known to him."
Rebbe Schneur Zalman continued: "I then realized that not only could he see all his actions in this present lifetime, he also was aware of all of the person’s previous incarnations since the six days of Creation."
Finally, Rebbe Schneur Zalman said: "In the end I realized that not only could he see his past actions and past incarnations, he could also see everything that this soul was destined for in the future until the coming of the Moshiach and after."  from Akiva of Mystical Paths
Addendum: Seems in my haste I left out a key point.

Moshe Krauthammer, who runs the Chevra Kadisha and is director of the Tiveryan cemetery, says, "My family has been living in Tiverya for 8 generations. We have a tradition passed down by each generation that one may not touch the tree or cut it down, and it must be left to grow.

"But Jews from all over the world have been visiting the tree, and taking its leaves and fruits as a segula for a recovery. Word got around and now the cemetery is swamped with visitors."
Posted by Neshama at 3:09 AM

Are you saying this tree hasn't given fruit for a long time? I didn't realise .... thought it was just a fruit-bearing tree in the springtime.

Devorah, from the article I assumed that it had not given fruit, because it said it was planted 270 years ago. So why are people clammering to come and get the fruit? In the rest of the article, it says they are coming for the fruit and make blessings, asking for refuahs.

Maybe they just come for the fruit every year ..... or maybe we'll have to go there and check it out for ourselves :)

From your mouth to
G-d's ears!