Prelude:
A masked marauder took a bite out of a woman in Prospect Park
- but was caught after he turned tail and ran. The odd attack by a rampaging raccoon happened as the victim enjoyed a Sunday outing with her family at The Lake. 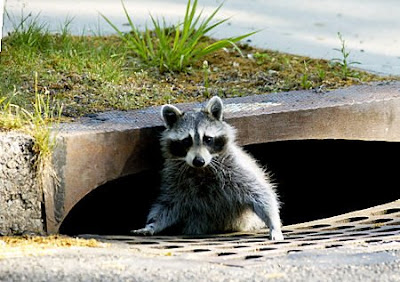 The animal had been lurking unusually close to people when it struck, sinking its teeth into the woman's thigh. Her husband managed to pull it off and then it fled, according to the blog Gowanus Lounge. Parks officials credited the NYPD with catching the attacker, which was found to be not rabid. It was euthanized.

Parks Commissioner Adrian Benepe speculated the raccoon simply got hungry. "If you see a raccoon coming toward you walk the other way," he advised. "These are tough New York City raccoons." Benepe pointed out that the animals are native to the area, noting, "They were in the parks before they were parks."
* * * * *
NYC - Panic From Swine Flu?
Now Comes Shivering Warning From DOH:
RACCOON DISEASE CAN KILL
A rare, deadly disease that has left an infant brain damaged and a teenager blind in one eye, has been detected in Brooklyn, the Daily News has learned. The city's Department of Health is on alert for Raccoon Ringworm, a disease contracted through contact with raccoon feces. It can cause permanent nerve damage and death.

"Parents should closely supervise small children in areas where raccoons live to prevent possible ingestion of raccoon feces," said Sally Slavinski, of a Health Department unit that deals with diseases that can be transmitted between animals and humans.
LEARN MORE:
Raccoon Ringworm Disease
Hits Brooklyn Teen & Baby
Posted by Neshama at 11:45 PM