Canada is doing what the East European Reformists couldn't do!

It didn't happen in the Yeshivos of Eastern Europe (Yeshivas Volozin opted to shut its doors), but now in 2009 it is happening in Canada, just a little North of New York.
On May 6 it was: Chassidic Schools Being Pressured to Add More Secular Curriculum 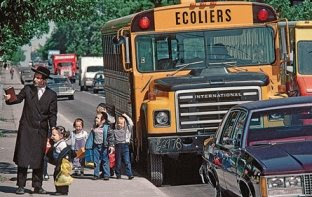 Education Minister Michelle Courchesne is reaching the end of her patience with the schools....

The chassidic schools have been under extra scrutiny by the education department for the past 2-1/2 years, ever since La Presse and other Quebec media began reporting that some of these schools are not complying with the Education Act.

As of May 8:  Hasidic High Schools
GIVE UP THE FIGHT
Since 1952, Montreal’s Hasidic Yeshiva Toras Moshe high school has taught the ways of God and the Talmud to the exclusion of nearly everything else. Only five hours a week are dedicated to non-religious study [....]
The Education Ministry recently gave Toras Moshe, as well as the Belz and Skver schools, until the fall to conform to provincial accreditation norms—meaning they must teach a minimum number of hours of non-religious subject matter. Belz and Skver, which are subsidized by the Quebec government, have both agreed to meet the government requests. Toras Moshe, which isn’t subsidized, hasn’t.
* * * * *
Someone commented that a solution might be:
Teach Jewish 'history', 'math' with measurements from the Torah, 'biology' by teaching what the Torah says about the body or about animals, Rashi's 'French', 'writing skills' by teaching students to write essays on Torah topics, etc.
* * * * *
Toronto, Canada - Eight families are taking the Ontario government to court over claims that the province is discriminating against disabled children who attend private religious schools -- a case that could reopen Ontario's contentious education funding debate.
Those children can receive those government-funded services only if they switch to a public or Catholic school -- both of which receive public funds in Ontario, said Allan Kaufman, one of the lawyers representing the families. Yet children with other disabilities, such as speech impairments, can receive government-funded therapy and services at a private religious school, he said. See full report at link above.
Posted by Neshama at 6:40 AM