Protesters were Singing, Dancing and Just Blocking Traffic to Show Their  Opposition of the Brutality of the Shabak on Jewish Boys.  Some held signs claiming "Inquisition" and "Jews Don't Torture Jews"

PLEASE READ THE FULL ARTICLE WHICH CONTAINS MANY FACTS AND SHOCKING INFORMATION:  Concerned father speaks about the brutal torture his son is undergoing, and the systemic effort to extract a false admission."Our son was on house arrest for three-and-a-half months, and on a Wednesday, 25 days ago, large forces arrived at our house and summoned him to investigation," he said.

"The father said he asked the forces what his son was being brought in for, and was told that he had breached the house arrest order. After testifying to them that he hadn't done so, and noting that detectives arrived at all hours of the day to confirm that, the father was told that they wanted to bring him in anyway, and "since then until yesterday I didn't see him."  ArutzSheva

Heads of municipal councils in Judea and Samaria on Monday urged Prime Minister Netanyahu for the first time to act with great determination to find the culprits in the Duma village arson murders. The council leaders also urged the Prime Minister to investigate the claims by the Jewish minors who are being detained in the case about violations of their human rights in the investigation. “The Ministerial Committee on the Shabak must be convened and exhaust the examination of the boys’ claims,” they said. “There must be an immediate clarification of the serious allegations of harsh torture of minors, which constitutes a serious violation of their human rights. We urge you not to drag the entire State of Israel into becoming a regime in which the investigator is also judge and executioner.” JPress 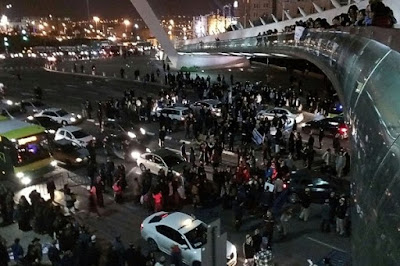 Thousands demonstrating near the Chords Bridge at the entrance to Jerusalem, in protest of the unwarranted incognito incarceration and torture of Jewish youths and minors by the Shabak. 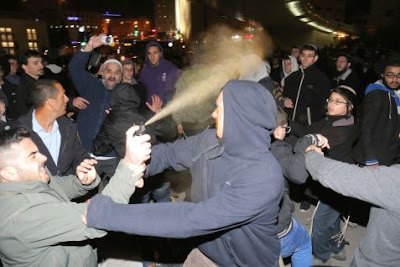 Police arrested six demonstrators and a policeman attacked Makor Rishon news photographer Miri Tzahi, pushing her camera into her face. She was taken to Terem medical center. Her face was covered in blood, according to a TPS report. (JPress)

Demands to punish police who beat journalists at Duma protest

Photos and Video from Jewish Press

Let the protests continue until all of Am Yisrael is enflamed and enraged at the evil perpetrated by these inhumane animals. Let us not rest until every single responsible party is punished according to the severity of his or her participation in this atrocity. It reminds me not only of the Inquisition, but of the Nazis too. State of Israel, shame on you for allowing this to go unchecked until now.Bibi, you can't hide anymore behind others doing the dirty work. If you don't stop this immediately you are guilty too.

This post starts with a different topic but soon focuses on this topic, and this topic alone.

Everybody just do what YOU can, that is all Hashem asks of you.

May the Geula Shelemah come none too soon. Amen.