IRAQI JEWS, the Jewish Nakba, and The Ingathering from Galut

Absorption of Jews** into Israel from the Golus Nations was/is an extremely difficult endeavor.
"Operation Ezra and Nehemiah, also known as Operation Ali Baba, was the airlift of more than 120,000 Jews from Iraq to Israel shortly after the founding of the Jewish state. In recent years, we are familiar with Ethiopian Jewry (Operations Joshua, Solomon and Moses) and the airlift of Yemenite Jews in Operation Magic Carpet. But the Operation Ali Baba of Iraqi Jews is not so well known.

"Most of you will be surprised by this, but we Jews have a Nakba too, and it's a major Nakba. It's a Nakba which is marked on November 30, when we commemorate the expulsion and uprooting of about one million Jews during the 20th century from their homeland in the Arab and Muslim world.

Thousands of years of Jewish presence in those countries,
even before the era of Islam, had come to an end.

"Unfortunately, our Nakba is private, as it has no international or even national support, it has no Israeli and foreign organizations which recognize it and work to raise Israeli and international awareness of its existence. It has no organizations to support it, write about it, interview us, photograph us, write scientific articles about us, the refugees who came from Arab countries.

"We have not only lost our property, which was left behind in Arab countries and is estimated at hundreds of billions of dollars today, but our rich culture and heritage as well. [Iraqi Jews constitute]  more than 50 percent of the State of Israel's Jewish residents.

"We have no funding and budgets like the Europeans and Americans and other Arab states funnel to the refugees of the Palestinian Nakba, we have no cultural institutions to give us the stage at the Tel Aviv Cinematheque or anywhere else, and above all - we have no media outlets to report about our activity and the suffering we experienced."  (Read full article)

In the plethora of articles published on 30 November, Dr Edy Cohen's* piece for YNet News stands out for pointing out that for years advocates for Jewish refugees from Arab countries have been struggling alone and without funding. It is only in the last year that they have received official backing from the Israeli government.

Apart from the great work of organizations like Jews Indigenous to the Middle East and North Africa, Justice for Jews from Arab Countries and Harif, I was amazed that the issue had only seldom been raised in any meaningful way on the Israeli or Jewish global agenda.

According to a law passed by then Member of Knesset Dr. Shimon Ohayon last year, this is now the date of the official day of commemoration for the Jewish refugees from Arab countries (November 30). Dr. Ohayon created for the first time ever, a Knesset Caucus for the Jewish refugees from Arab Countries, and although the meetings were well attended and frequent, the attendees were mostly the survivors of pogroms in the Arab world and the expellees themselves, and few from the following generations.

To spread greater understanding of the issue abroad, with the Ministry of Foreign Affairs Bureau for World Jewish Affairs and World Religions, headed by Akiva Tor, we created a traveling exhibition (see below) that would be sent to embassies, consulates, Jewish communities and organizations around the world to print out locally and display at relevant events surrounding the date.

To View Pictures of the Traveling Exhibition 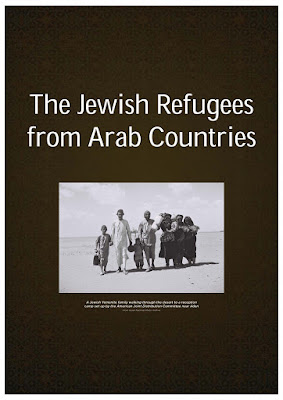 The Expulsion Day was marked Monday, November 30, an academic conference at Bar-Ilan University and in a key event at Jerusalem's Malha Mall, funded by the Ministry for Social Equality. In addition, the Foreign Ministry has instructed its representatives abroad to hold conferences with the local Jewish communities, and the Education Ministry has ordered schools to hold activities for the students on the issue of the Jews from Arab countries and their immigration to Israel.

*Dr. Edy Cohen, an expert in Middle Eastern affairs and a research fellow at the Menachem Begin Institute for the Study of Underground and Resistance Movements at Bar-Ilan University.

***Ashley Perry is Ashley Perry (Perez) is President of Reconectar and Director General of the Knesset Caucus for the Reconnection with the Descendants of Spanish and Portuguese Communities. He was adviser to Israel's Minister of Foreign Affairs from April 2009 to January 2015. He has also worked with several other government ministers, Members of Knesset and many of the leading international Jewish, Zionist and Hasbara organizations. [and writes a blog page at TimesofIsrael

Of course everyone knows about Nefesh b'Nefesh
for the English (France, UK, Canada) speaking Jewish Aliyah

But there is also:

Chart of Immigration to Israel from 1948 to present


Also recommended reading: do not do unto others by Hava at CDG, Yerushalayim, Eretz Yisrael Shlemah

I was going to link to you from the section about the 'nakba' day - but you commented with the link, and that will do.

And thanks for the link!

Wonderful post! I am half Iraqi, as my mother and her parents were part of the group that was forced out in 1951, when my mother was only a year old. I know basically nothing about my heritage. Only three years ago did I find out that I am a direct descendant of Hacham Abdallah Somech,and this was only because when my grandfather passed away, they found documents with this information! What a rich, beautiful heritage all of the Iraqi Jews have lost. Thank you again!